Another day, another group of angry rich homeowners who want nobody to use their streets but them.

James Shaw Street in Beaconsfield, the Cavendish extension, and now residents of Montreal West are upset because one of their roads is being used by people who are not them. And their arguments just don’t hold water.

Here’s the story: Montreal West put up concrete barriers at Broughton Rd. and Easton Ave. to prevent traffic from crossing their border with Ville St. Pierre. According to the MtlWesters, it’s because people are using Devil’s Hill (Broughton/rue des Erables, depending on what city you’re in) as a shortcut to Highway 20. According to the VSPers, it’s nothing but class warfare, separating the less affluent Lachine residents from the rich homes that are literally at the top of the hill.

A quick look at the area and it’s hard not to take Ville St. Pierre’s side on this. First of all, while going through this area does indeed lead to Highway 20 via Norman street, I’d hardly call it a shortcut. First you have to get to Broughton, which is difficult because the intersection of Broughton and Westminster is now a raised sidewalk (the red mark in the map below). Then you have to navigate the forced turns and one-way streets designed to make driving through these parts as difficult as possible.

Finally, even if you make it through to VSP, you immediately hit another forced turn (on weekdays) from which there is no escape but back where you came from.

The only solution is to take Avon Rd. (which everyone else calls St. Jacques) down to Milton and then through to Norman St. This route isn’t blocked by MtlWest’s plan, because it doesn’t go through their residential streets. It’s also silly, since just continuing down Avon/St. Jacques leads you straight to the highway through the other part of VSP.

Today, with the barrier out of the way, I passed by that area to see what the traffic was like during the afternoon rush-hour. It was non-existent. Anyone who knows the area knows you can’t get to the highway for the reasons listed above, and anyone who doesn’t isn’t going to bother wasting their time trying to find a shortcut.

So giving them the benefit of the doubt and assuming they’re not hallucinating anything, how is it that cars are taking this route? I have a few suggestions: 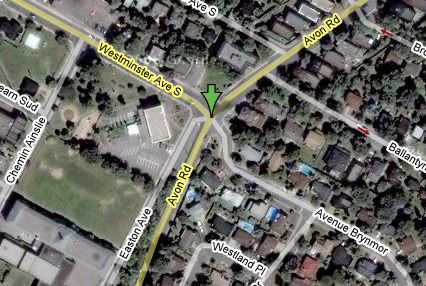 But hey, I’m not a civil planner, what do I know? Keep using our roads and not allowing us to use yours. Keep driving by my apartment at all hours of the night and then yelling at me when I so much as sneeze in your neighbourhood.

P.S. To Lachine mayor Claude Dauphin, who asked: “Where else in Canada have you heard of a municipality that erects barricades to cut itself off from its neighbours?” — have you never driven down Acadie Blvd.?

19 thoughts on “What are you doing driving on my street?”