This week I spoke with Nicolas Stone, a resident of Cartierville three houses away from Toupin Blvd., who is one of many in that area opposed to a northern extension of Cavendish Blvd. The plan would connect Cavendish, through a new development in Bois Franc, to Henri-Bourassa Blvd. at Toupin Blvd. 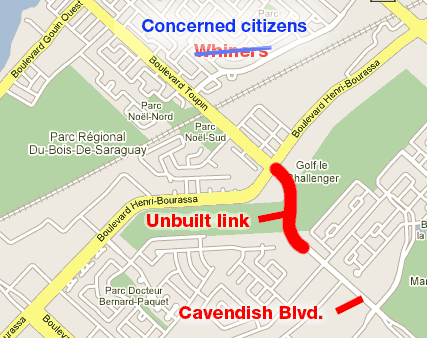 The residents (whom I dubbed “concerned citizens” as you see above) oppose it for the obvious reason that it would turn Toupin Blvd. into a throughway (even though there’s nothing beyond the neighbourhood — the closest bridges to Laval are at Marcel-Laurin to the east and Highway 13 to the west).

Stone (a husband with three hyperactive toddlers I found after he made a comment on this blog) makes a compelling case. His concerns mainly revolve around philosophical objections to creating more roads and encouraging single-passenger traffic. He takes public transit to work and used to bike everywhere.

He was a good sport about the interview, even when I flat-out accused him of being part of the problem by contributing to urban sprawl.

3 thoughts on “Making the case for a quieter Toupin Blvd.”