This week’s Justify Your Existence features a slew of “urban planning geeks” who met a few weeks ago to discuss the proposed redevelopment of Griffintown, a sad-looking area just south of downtown. They met at the behest of A.J. Kandy, who runs the Save Griffintown blog and lives in nearby Little Burgundy. 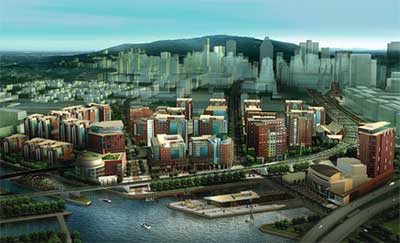 They’re not opposed to the project necessarily. It would revitalize the area, be entirely privately-funded, and provide a lot of housing (social and otherwise). But they’re concerned about its proposed size, which would put an entire neighbourhood under the control of a single real estate company, and some measures they think will encourage car use and discourage pedestrian traffic. (Big box stores like Wal-Mart, for example, take forever to walk around and provide nothing but a brick wall for most of its street-level facade.)

They prefer a mixed environment that’s seen all over downtown Montreal: Commercial establishments at street level, with housing above. They also want more consultation with residents, a promise not to expropriate land, and a cookie.

(UPDATE Dec. 30: Kate mentions formatting problems. Unfortunately, The Gazette hasn’t been able to steal Chimples away to run their copy-paste online operation … yet.)

(UPDATE Dec. 31: AJ has a post on Save Griffintown going into more detail about where they are now.)

(UPDATE Jan. 4: I totally missed it (and I think everyone else did too), but coincidentally in the same issue, J.D. Gravenor interviews Griffintown residents Chris Gobeil and Judith Bauer about their place. Both were part of the urban planning geeks and Gobeil is quoted in my article.)

Also this week is a bluffer’s guide to Canada’s Do Not Call registry. Bell was awarded the contract to run the list (as the sole bidder), and now we’re left wondering if the fox is guarding the chicken coop. The list, which will be free and binding on telemarketers who aren’t charities, politicians or newspapers (haha, suckers) is to be up and running by Sept. 30, 2008.

UPDATE (Jan. 23): Chris Gobeil and Judith Bauer have an op/ed in Le Devoir about Griffintown’s future.

One thought on “TWIM: Griffintown and telemarketers”