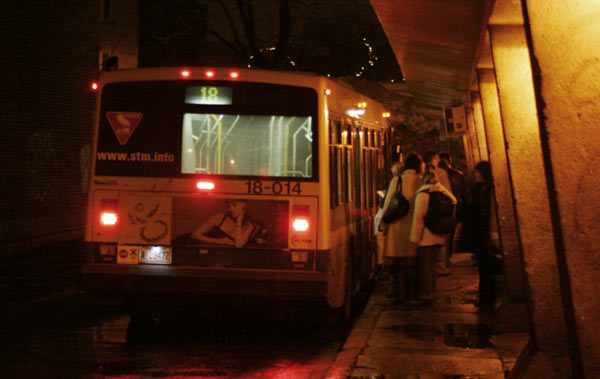 You’ll actually be waiting more, not less, for the 18 bus outside of rush hour.

The STM is trumpeting huge, noticeable improvements to bus and metro service that finally came into effect on Monday. The additions come in two parts:

The STM is adding 145 new departures every week to all but the yellow line. The goal is to reduce waiting times and get more people using the metro.

The change is most visible outside of rush hour. That means the very early morning, during the day, late evenings, at night and on the weekend. On weekdays outside of rush hour, the waiting times will all be reduced by at least a minute and a half – a rather noticeable change.

Going out today, I decided to time the intervals between metro trains. Sure enough, for orange line trains going through downtown at 6:45pm, the trains were just under six minutes apart on average, which the STM says is an improvement on the previous eight minutes.

Though the wait times during rush hour (when almost all trains are already in service) won’t come down much, this move might serve to eventually lighten that load a bit. An extended rush hour means that fewer travellers will organize their schedules around rush hour to take advantage of the short waits.

I can’t be the only one who prefers to travel during peak hours because of how much faster it is. Extending rush hour will spread this tendency out a bit and hopefully make it spike a bit less as the whistle blows at 5pm.

The other part to this service improvement is the more interesting one: the STM has announced additional buses being added to three popular lines: 18 Beaubien, 24 Sherbrooke and 121 Sauvé/Côte-Vertu. It’s also making the 54 Charland/Chabanel a rush-hour-plus-between-rush-hours service, which is becoming more and more popular (but to me only seems frustrating because the service stops by 7pm).

Today I went to the Beaubien metro bus stop for the 18 bus and observed as buses passed to pick up passengers headed east for the evening rush hour. Most of the buses had their seats filled, but none were so packed that nobody else could get on. They were running on intervals of about 3-4 minutes during rush hour’s peak (5:30pm), and 6-7 minutes just after rush hour (6:30pm).

This, despite complaints from the employees’ union that there’s a bus shortage affecting service.

Here’s the problem: The schedule itself hasn’t improved. If anything, service is being reduced on these three lines.

Curious to get some numbers on the improvements to these three lines, I checked out the Planibus schedules on the STM’s website, and compared the times to the older schedules that had just expired. In some cases, there were improvements to wait times and extended rush hours. In other cases, however, wait times were increased rather than decreased.

For the rest of the time, here’s what I found: 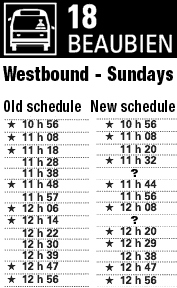 TOTAL: 7 fewer departures that I can count.

This is a huge missed opportunity for the 24. The Sherbrooke bus is notorious for having horrible service outside of rush hour. On weekdays after 6pm (Westbound) and 7:30pm (Eastbound), intervals climb dramatically to 20 minutes. After 7:30pm (Westbound) and 10:30pm (Eastbound), it climbs again to 30 minutes. That’s unacceptable for a bus that travels through downtown and through two metro stations.

People who were looking forward to shorter evening wait times for the 24 will be sadly disappointed. As will anyone trying to take this bus on the weekend, who are guaranteed to get even worse service than they had before.

Note: The previous schedule for the 121 was broken on the STM’s website, and so previous figures for eastbound departures are from a 2-year-old schedule.

At least in the case of the 54, the STM was speaking the truth. The rush-hour schedule is unchanged. Departures are added between the rush hours (12 new departures eastbound, and 11 westbound), with an interval of 27 minutes between buses in either direction. Final departures of the day are at 6pm (Eastbound) and 6:15pm (Westbound).

I’ve sent a request to the STM for comment, but after 48 hours there has been no response.

UPDATE (Jan. 16): I finally spoke to someone at the STM’s media relations. Apparently the service reductions are normal seasonal adjustments that happen every January as demand goes down. Look for an article with details on Saturday.