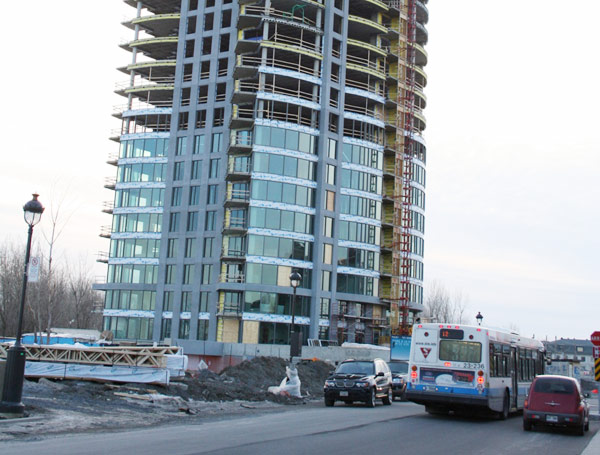 As if trying to find a way to sound more like elitist suburban NIMBY snobs, residents at the southern tip of Nuns’ Island have apparently complained to the STM that they have too much bus service. They complain about the noise and dust generated by the buses.

I know buses are loud. I hear them outside my living room window every day. But I’ve never thought to complain about them, nor have I ever experienced dust problems (do they shed?)

Perhaps the noise and dust problems in the area might be due to the fact that it’s one giant construction zone for upscale condos? The photo above is one of many new skyscraping condo buildings going up in what was once empty space near a park.

The STM, after considering numerous half-assed schemes to placate residents and needlessly inconvenience public transit users, has concluded that it’s not reducing service to the area. The article doesn’t make clear which side Claude Trudel is on, since he’s both the Verdun borough mayor and the chairperson of the STM board of directors. Let’s hope he and his constituents realize this is the best option for everyone involved.

Especially when you consider that one bus on the road can replace dozens of SUVs.