Speaking of Page One screw-ups about Quebec’s 400th anniversary, the local media is going nuts (and the local blogosphere doing the same) over the magazine Paris-Match‘s new issue about Quebec. It looks fantastic except for one minor error:

They thought it was the province’s anniversary, not the city’s. So the section focuses on the province, and mainly on Montreal. 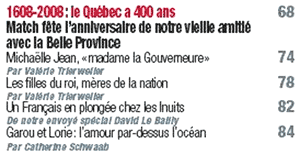 Oops. I guess they don’t understand that subtle “à” vs “au” distinction. (Do they not have that in France?)

Here’s my question though: Why didn’t reporters pick up on this when they did all those laudatory stories about Paris Match’s upcoming issue earlier in the week? You don’t think they just rewrote a press release without thinking about it, do you? (At least Pierre Cayouette was scratching his head at the possibility they got this wrong before it came out)

UPDATE: This gem of a quote from The Gazette:

“We didn’t know there was a competition between Quebec City and Montreal and to be honest, it doesn’t really matter to us and to our readers. But we now see that it is sensitive issue here,” (editor-in-chief) Martin-Chauffier said.

I think someone needs to explain to this person that this isn’t a cultural difference, it’s a factual error.

UPDATE (June 30): The editor continues to not apologize for the factual error and hence imply that we misunderstood them and they know better than us what this is all about (Patrick Lagacé calls BS and isn’t letting him off the hook). I’m starting to understand why everyone hates the French.

Meanwhile, competing French media have taken notice of the mistake: Liberation has a piece from AFP on the matter (via mtlweblog) and 20minutes and Le Post also giggle at Paris-Match’s misfortune.

UPDATE (May 28, 2015): Paris-Match screwed up again, saying Pierre Karl Péladeau wants to make Quebec City a country in a headline.

4 thoughts on “Paris-Match screws up on Quebec”