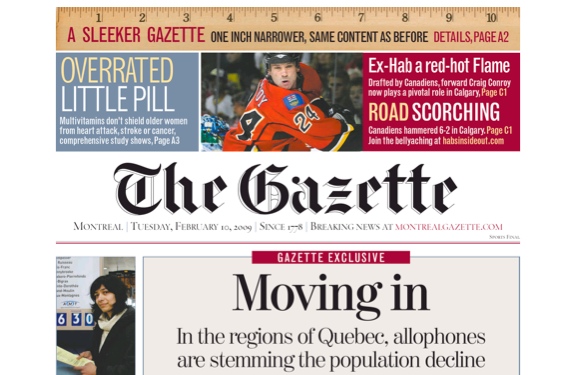 Starting with Tuesday morning’s paper, The Gazette (the newspaper I work for, you’ll recall) has reduced its web width by exactly one inch in an effort to save costs. It may seem silly to think that such a small reduction in the size of each page would result in significant paper (and therefore money) economies, but apparently it does, which is why newspapers like the Globe and Mail have already done so.

The Gazette is reconfiguring its second press for the narrower page size, which means some sections will be printed on narrower pages while others will have larger gutters as the narrower content is centred on the wider page. The changeover is expected to be complete in two weeks.

But there are some layout changes. Among them:

One thing that’s not changing is the body type. It’s still 8.7-point Nimrod MT, exactly what it’s been since, like, the dawn of time, or at least as long as I’ve been there.

So, is the newspaper crisis solved yet?

9 thoughts on “Hey Gazette, have you lost weight?”