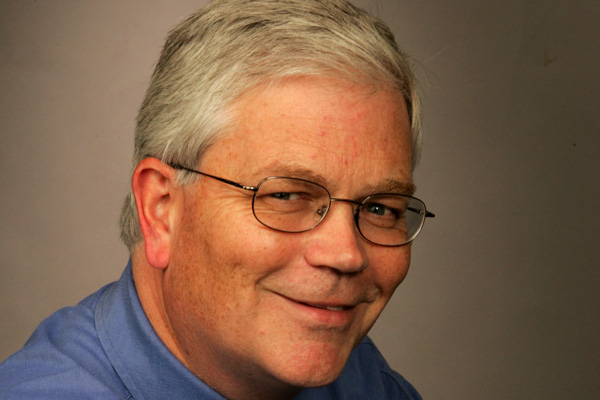 Gazette editor-in-chief Andrew Phillips in a 2005 photo by Richard Arless.

Today was a strange one at the office, and not only because I was sitting at a desk in the Business section. On one hand, some employees were celebrating their induction into the Quarter Century Club (25 years of service). On the other, it was the last day of a colleague on the copy desk who is now enjoying his retirement.

But while we saw those two things coming, we didn’t anticipate an email saying that the paper would be losing its editor-in-chief.

Andrew Phillips, who was named to the top editorial position in October 2004, began his career here 35 years ago as a summer intern before moving on to Macleans magazine and the Victoria Times-Colonist.

The soft-spoken Phillips wouldn’t comment on why he’s leaving or what’s next in store for him, beyond saying that “it’s time to move on.”

It would be irresponsible of me to hypothesize, therefore I’m going to guess his departure is part of a massive government conspiracy and Phillips is sacrificing his career as part of a convoluted plan to help Jack Bauer stop a bionuclear attack on Canadian soil.

But seriously, as a journalist himself, Phillips always fought for the newsroom, pushing for more investigative journalism and finding ways to protect it from the inevitable budget cuts. He may not have always succeeded, but he always tried. For that, the newsroom will surely miss him.

Publisher Alan Allnutt, who was Phillips’s boss at the Times-Colonist and brought him along to the Gazette, had nothing but praise for his colleague today:

I have spent much of the last eight years working in close partnership with Andrew at two newspapers and I have nothing but great admiration for his intelligence, his principles and his journalistic talent.

In an email to staff today (republished here with his permission) Phillips himself wrote:

I’ve been associated with this paper all my adult life; it was 35 years ago that I first stepped foot into the ancient newsroom at 1000 St. Antoine as a summer student. It’s been a tremendous privilege to occupy the editor’s chair for the past few years, and to see how this newsroom has risen to the challenge of dealing with particularly tumultuous times in our industry. We’ve accomplished a lot over the past 4 1/2 years – remaking the paper and making the move to online. I’m proud to have worked with all of you, and grateful for the opportunity to get to know you on a personal level.

Phillips’s last day is May 8. Managing Editor Raymond Brassard takes over in the interim.

UPDATE: CBC has a brief about Phillips. Kirk Lapointe also writes about his departure.

3 thoughts on “Andrew Phillips to leave The Gazette”