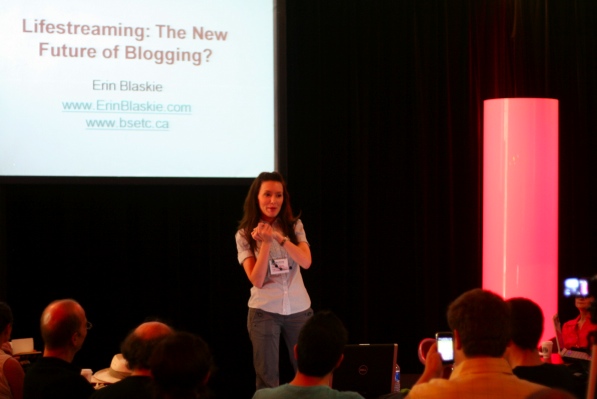 "Lifestreamer" Erin Blaskie gets lots of attention from techies, but little from media

This weekend, I spent some time at a conference put together by members of the local web technology community. I learned quite a bit from its speakers, met a few people and learned about a few more.

Most of the presentations were on the technical side, targeted towards WordPress developers. Others, like that of Erin Blaskie above, had ideas that could be taken up by someone who’s never touched PHP code.

Near the end of the conference, a guy from Canoe (Quebecor’s web portal) stood up and said the Péladeau emppire is looking for bloggers and websites to join its network. That announcement rubbed me a bit the wrong way as Quebecor is currently in a labour dispute with the Journal de Montréal and is relying on its other properties to provide it with content. Anyone who takes him up on his offer could find themselves unwittingly becoming backdoor scabs.

But at the same time, it made sense. Here was a room of dozens of smart web developers and web entrepreneurs, many of whom are working hard at creating online properties with a sustainable business model. Sure, most will fail miserably, but their willingness to take risks only makes them more valuable. The next major web phenomenon is going to be created by someone similar to the type found in this room.

And yet, besides a single face from Quebecor, and a reporter and photographer from The Gazette, there weren’t any representatives of the media present. No executives looking to poach some smart programmers and idea generators to build things for them that will make then money.

To survive this media revolution, companies have to be innovative, have to think outside the box, have to take risks and have to be prepared to fail. Participants at WordCamp and similar conferences are ideal people to do those things.

Mainstream traditional media are currently in a death spiral. They don’t have time or money to think about innovation in any serious way. And so they don’t. And that just makes the problem worse, while the people who could solve their crisis sit on the unemployment line or go out on their own.

4 thoughts on “Much talent, few scouts”