A few months into its campaign to “Save Local Television”, CTV has managed to get its competitors CBC and Global to join its rebranded campaign “Local TV Matters” (there’s even a Twitter account!), trying to get public support for CRTC regulatory changes that would allow conventional television stations to charge cable and satellite companies for distribution of their signals.

The website’s FAQ lists PR-generated counter-arguments to some common complaints, but seems to ignore the history of conventional television and why it’s free in the first place.

Decades ago, before there was cable, conventional television was all there is. Most stations were locally-owned and had powerful transmitters to reach as many homes as possible. Revenue came from advertising, which was fine because everyone watched TV in primetime, and everyone watched the local news.

In the early days of cable, the specialty channels were low-budget affairs and highly specialized. Music videos on MuchMusic, live sports on TSN, non-stop weather updates on the Weather Network. Quality primetime programming came from the conventional networks like CTV, which was back then a cooperative of local stations. Local programming gave way to network (Canadian and U.S.) shows in primetime, but mornings and early evenings were still largely local affairs. 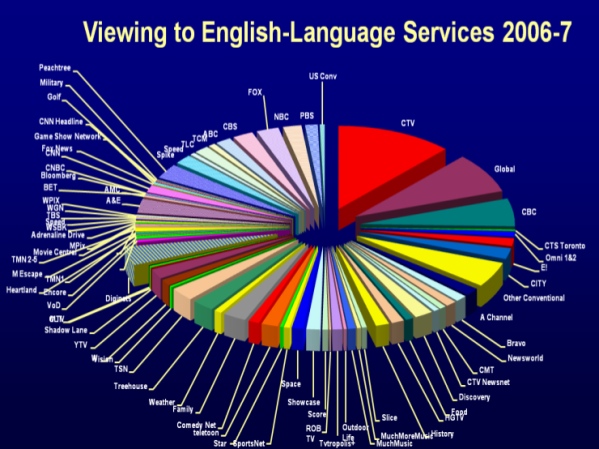 The proliferation of specialty channels is a large part of why conventional television isn’t what it used to be. The audience is fragmented, and the conventional networks’ piece of the pie has diminished, along with advertising.

Specialty networks don’t have to provide local programming, though on the other hand they cannot accept local advertising and they cannot transmit over the air.

Now that more than 90% of Canadians have cable or satellite service, the advantage of over-the-air transmitters is outweighed by their cost. And because most advertising is national in scope, and targetted to specific demographics that specialty channels are better at reaching, that advantage too has disappeared.

What’s left to give conventional television stations an advantage is the programming itself. But while many people still watch the news, it’s not enough to pay for it. In very few markets does local news attract enough advertising revenue to pay for itself. So those newscasts (especially in smaller markets) have been drastically cut. Local news has been replaced by more pre-packaged news packages from the networks. Programming outside of the local newscasts has been all but eliminated.

So what can we do about this? Should we just shut down the conventional networks? Obviously the networks don’t agree with that idea, because conventional television is still making them money.

How about a government bailout? Consumers would be opposed to that, and it creates all sorts of problems (should broadcasters be paid equally, or based on the ratings of their newscasts?). Besides, there already is one in the form of the Local Programming Improvement Fund, a 1.5% tax on cable and satellite companies’ revenues that goes to help programming in small-market stations.

What CTV et al are proposing is that broadcasters and distributors negotiate a fair market value for carrying their stations. It’s not entirely clear what the details are, such as whether consumers would be able to choose which conventional television stations they would pay for (they could pay for none of them and just hook up the rabbit ears to get them free), or whether they would be forced to pay for them like we’re forced to pay for CBC Newsworld and CPAC whether we want to or not (such mandatory carriage would leave cable and satellite companies without a bargaining chip, making negotiation difficult).

The networks’ prime argument in launching this campaign is this:

One of the campaign’s concerns is that cable and satellite providers continue to charge viewers for our services, yet they pay nothing to local television stations. However, Canadian cable companies pay U.S. cable channels in excess of $300 million a year for their services, and these cable channels are not required to produce any Canadian content. The campaign members are standing up to change this system because they believe local stations deserve fairness so viewers can continue to enjoy local television programming now and in the years to come.

The argument about channels like Spike and CNN not producing Canadian content is valid. Of course, the CRTC takes this into consideration when approving a U.S. channel for distribution here. U.S. networks aren’t allowed to compete with Canadian ones on (basic) cable, which is why we didn’t have MTV to compete with MuchMusic or HBO to compete with the Movie Network until Canadian versions of those channels launched recently.

But the comparison to conventional television is based on a faulty assumption. People don’t pay for conventional television stations as part of their cable bills. People get cable because they want CNN and Spike, not the local news. The bills for basic service cover the physical cable service as well as CRTC-mandated specialty channels like Newsworld and CPAC. Cable and satellite companies don’t charge consumers to give them local television stations, because you can’t charge people for something they already get for free.

The big irony of the argument is that the CRTC mandates that cable and satellite companies distribute local television stations as part of their basic service at the request of those television stations. In cable’s infancy, local TV wanted to be on cable to reach larger markets and get more advertising revenue. They even got the CRTC to guarantee they’d get the lowest spots on the dial, which back then were considered prime electronic real estate.

But I understand times change. Things are different now, the model is broken.

At least, they say the model is broken. CTV and Global haven’t released detailed financial reports showing how much money they’re losing on conventional television (or if they’re losing any at all). We have only their self-serving word to go on here.

The CRTC will be debating the future of local television in November.

A side note about the “Local TV Matters” campaign: the website (which is WordPress-based) has open comments on its posts, and there’s already a lot of them from incredulous consumers asking why they’re being asked to pay more when their local programming is being cut to the bone. I’m a bit surprised the comments are still up there, and wonder what it will take for them to shut down dissenting consumer opinion.