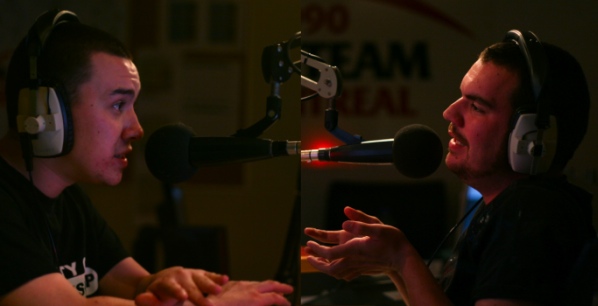 I decided to do one better and find out what his show is all about. So I interviewed him and observed during (most of) a broadcast in studio last Saturday.

It’s called Ringside Report. Until this week it was a weekly show on the Team 990 about professional wrestling and mixed martial arts, on Saturday nights from 10pm to 1am.

Dave Simon, the guy who emailed me, took over a Saturday night pro wrestling show at the station three years ago. He had been an operator for the station (he started at the Team five years ago at age 18 after meeting Ted Tevan and telling him he wanted to get into radio) and it was suggested he take it over because of his love of pro wrestling. He asked a friend of his from Dawson College, Kevin McKough, to join him as a co-host, and the two began working together on the show in September 2006.

A little over a year later, they decided to expand it into their other passion: mixed martial arts. And since it’s also done in a ring, throw in some boxing for good measure. But pro wrestling and MMA are the focus. 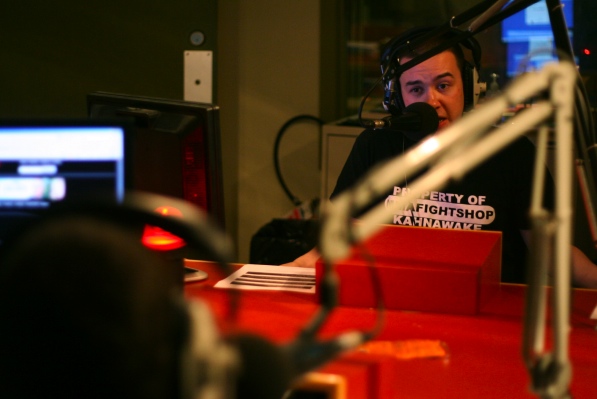 Dave Simon (top) does most of the talking

Simon and McKough perform different functions on the show, sort of like the play-by-play guy and the analyst. Simon does about two thirds of the talking, including the welcomes and goodbyes. McKough, who Simon dubs “Big Tuna” on the air, handles the booking of guests. Unlike what you’d find at the CBC or on the Howard Stern show, there is no support staff for this program. Simon and McKough have to do all the preparation work themselves. Tonight, they were getting help from operator Johnny Bertolo, handling the music and ads. 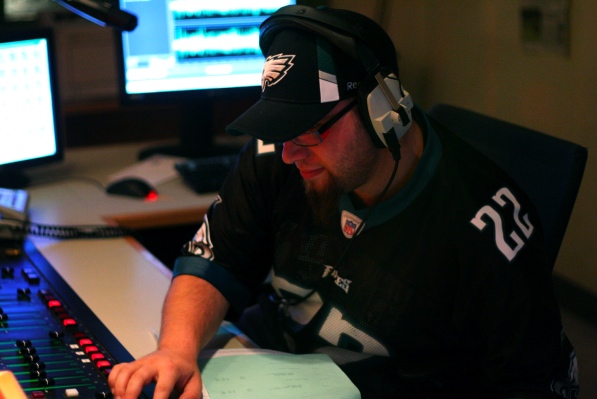 Johnny Bertolo, who I believe said something about being a Dallas Cowboys fan, handles the sound board.

Simon says he has no idea how many people listen to his show, though considering the Team 990’s ratings and the fact that it was on Saturday nights when few people are tuning in to the radio, you can imagine it wasn’t much. The podcast of the show has 40-50 downloads for each episode, Simon says.

Still, someone at the Team must have liked the show enough, because they’ve given the green light to expanding it. Instead of a three-hour show on Saturday nights, Ringside Report will air three nights a week (two hours on Wednesday, two hours on Friday, and an hour – likely pretaped – on Saturday), starting tonight.

While it means losing two nights a week to work, it will also free up Saturday nights, which are big for UFC (Simon said that “at least once a month, the UFC is on at the exact same time”). That wasn’t a problem when it was a wrestling show, since WWE pay-per-view events are on Sunday nights. But “for the UFC, it just doesn’t make sense,” Simon said. Now he’ll be able to go to events on Saturday nights instead of having to be in studio.

Though they haven’t concretely figured out a format for their new five hours a week, Simon said listeners should expect more of what they were already hearing. “Now that we’re on more often, we can really go into stuff,” he said. That means more news, more opinion, and more guests.

Simon and McKough hope the increased exposure leads to increased ratings and attention from advertisers, who are currently more interested in hockey than MMA.

“With time, it’s been a steady progression, which is all I’m really looking for,” Simon said. “As long as it’s steady and it’s continuing up and it’s not stagnant at any point, I figure I’m all good.”

Both Simon and McKough see this as a potential lifelong career, if they can find a way to make it financially viable. Right now both of them have day jobs to pay the bills (Simon also works on the Team’s NFL show during the season), but “if people ask me what I do, this is what I tell them,” McKough said.

Their long-term goal is national syndication, and becoming synonymous with MMA and pro wrestling on the radio. (Boxing is less of a priority for them, partly because the sport isn’t as active, and partly because boxing promoters are difficult to deal with compared to MMA.) They hope that “within the next year, we’ll try” to expand the show to more markets. 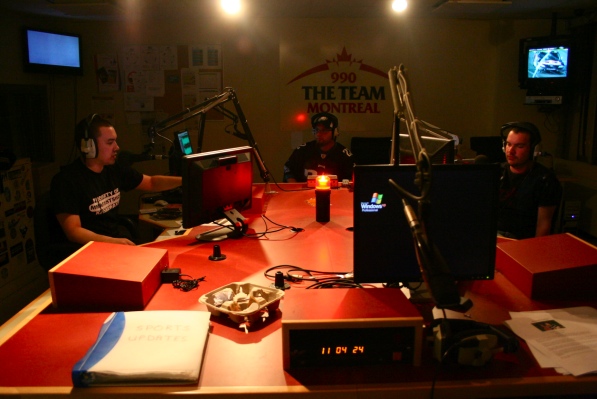 Though you might think that a couple of guys chatting on the radio doesn’t require a lot of work, both hosts take their functions seriously. Simon says he spends 8-11 hours a week watching professional wrestling, plus all the time he spends reading news, watching interviews and otherwise consuming everything there is about wrestling and MMA. McKough spends a lot of time chasing small-time guests, who Simon observed are strangely more difficult than the bigger stars, who call promptly and are always prepared at the booked time.

I asked Simon if all that time and work that ever weighs on him, if he ever gets tired of it. “Never, never ever,” was his answer. Though he might look longingly at sunny days outside when he needs to catch up on recorded pro wrestling shows on his PVR, he can’t get enough of his passion.

4 thoughts on “Ringside Report: the little radio show that could”