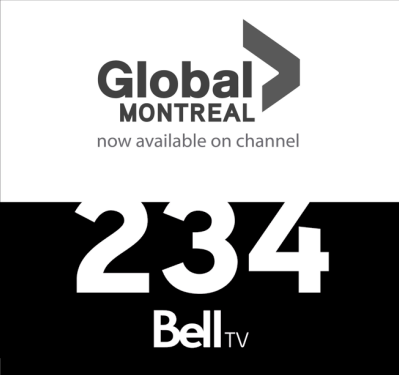 Half-page ads from Global Montreal appearing in The Gazette

Station manager Karen Macdonald says that after 12 years on the air, CKMI finally got added to the dial in late August. CFCF and CBMT have enjoyed places on the dial for years now, and this absence has always been a sticking point for the station. So, she says, “we are very happy.”

The reason is obvious: Quebec has a large number of satellite TV subscribers, and this move will give the station a much broader reach, which would translate into higher advertising revenues.

Bell TV isn’t paying them a dime to “sell” their signal. They’re stealing it. And Global couldn’t be happier.

I bring this up to point out the ridiculousness of the argument from the Local TV Matters people, led by CTV, that cable and satellite companies are “stealing” the signals of conventional broadcasters. In fact, the CRTC requires them to carry those signals, and many (especially satellite) would love nothing better than to get rid of conventional television stations from small markets whose spaces on the dial could be given to more lucrative specialty TV programming.

CTV et al argue what they want is “negotiation for value”, which is different from a mandatory fee for carriage. Supposedly, this means that the cable and satellite people would get in a room with each broadcaster and hammer out a fee for their signals. For such negotiation to work, each side would need a bargaining chip. So CTV seems to have accepted that cable and satellite companies could choose not to pay for TV stations if they find the price demand too high.

I’m highly skeptical of this. If the Global ad at the top of this post shows anything, it’s that being on cable and satellite brings in a lot of money. Are we seriously supposed to accept that they would just sit there and accept if cable and satellite companies decide they don’t want to pay and cut the stations off from 90% of their viewers?

There is little incentive for a cable or satellite company to carry a local conventional television signal. Hook up a pair of rabbit ears and you can get it for free. And since cable and satellite companies don’t charge for conventional television (and CTV wants to make sure that they couldn’t if this system were put in place), there’s every reason to believe that the negotiated price for carriage will be zero or close to it. If broadcasters balk, it’s no skin off the cable companies’ backs. They can simply delete the station from their lineups and add another specialty channel with non-stop Seinfeld reruns they can charge $2 a month for.

But, you argue, this negotiation system works in the U.S. And it does. Broadcasters there have the option of getting mandatory carriage for free or negotiating a price with cable companies. But U.S. conventional broadcasters have original programming you can’t get anywhere else. Canadian conventional broadcasters buy U.S. programming and rebroadcast it. Unless blocking U.S. channels is part of this plan, Canadians could tune into stations from Burlington, and all we’d miss aside from local news are shows like So You Think You Can Dance Canada.

I have sympathy for conventional broadcasters. They’re stuck in an unfair situation, competing against specialty channels that have no local programming requirements and provide the bare minimum of original programming, while being able to charge a fee and collect ad revenue. According to the CRTC, their profit margins sank from 5% ($113 million) in 2007 to 0% ($8 million) in 2008, a 93% decrease. They’re right when they say that the model is broken.

But the arguments they’ve been making are ludicrous. This latest one suggests that cable companies take 70% of cable bills and “pocket” it as pure profit. That’s ridiculous on its face.

According to the CRTC’s latest communications monitoring report, which is a far more reliable source than industry press releases, telecommunications companies’ profit margins are about 40%, but the margins from television broadcasting distribution are much lower than that. Cable made 28% profit in 2008, and direct-to-home satellite made 19%, both increases from the previous year. Those are very healthy profits, but not nearly as healthy as those from the telecommunications sector – telephone, Internet, wireless and other non-broadcasting activities that bring in a lot more money.

Like the broadcasters, the cable and satellite companies have banded together and launched a campaign filled with half-truths. They say that conventional broadcasters made $400 million in profit last year, which is about 50 times more than what the CRTC says the industry made. When asked where those figures come from, the Stop the TV Tax people point to a quarterly report from Canwest and an opinion piece about CTV, neither of which corroborate the figure. They also argue that their own margins are “very slim”, which is total bullshit.

Of the two campaigns, CTV’s is definitely more active, slicker, and probably better funded. (Imagine if they took all the money they’re sinking into these campaigns and used it to improve programming – maybe Canadians would start watching again.) CTV’s campaign is also much more ridiculous and juvenile. They literally have a guy in a cow costume touring the country. They’ve created two professionally-produced music videos and five hard-sell TV ads and they’re airing all of them on their networks, particularly CTV’s specialty channels (note the irony there). When Dave Carroll’s music video launched, they took five minutes out of local newscasts to play it in its entirety, with no analysis, no opportunity to respond, and no commentary. An infomercial during a newscast.

CTV’s latest “PSA” gives you an idea of just how delusional they’ve become. It compares the actions of broadcasters and broadcast distributors to a carrot and a stick. The broadcasters want to keep local TV and bring happiness to bunnies, while the cable and satellite companies are “threatening punishment” by saying they’ll pass on charges to the consumer and strangle those bunnies.

But threatening punishment is exactly what CTV is doing. Their latest threat is to shut down 10 of 11 stations in Ontario, leaving only their profit-making station in Toronto. They’ve already shut down CKX-TV in Brandon, something they’re reminding us about over and over again. Makes you wonder if CTV might have wanted to shut down that station in order to improve its bargaining position.

I agree the model is broken, and that cable and satellite companies are making too much money (because there is insufficient competition, not because they’re stealing signals). We need to re-examine the entire system, and come up with a structure that’s fair to all parties, rewarding local and original programming. But this debate is too serious to be done via advertising campaigns featuring guys in cow costumes.

The deadline for comments to the CRTC on this issue is Nov. 2. At least we can take some comfort in the fact that the campaigns should end after that.

21 thoughts on “A dose of reality in the TV debate”