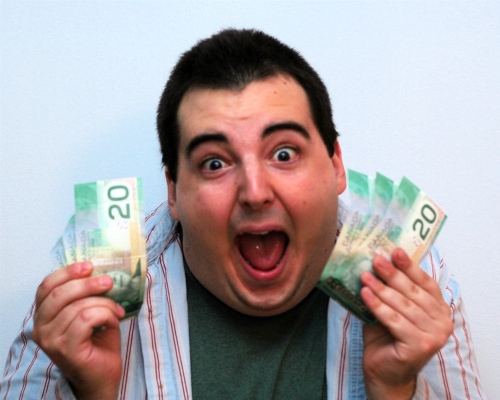 I got so much money, I'm giving it awaaaaaaaay!*

Last year, I found myself in the enjoyable position of having some extra money laying around, so I decided I’d give some of it to a local charity. Being a self-centred narcissist obsessed with attracting attention, I decided to tie it to the number of people subscribing to my blog.

My eight-week contract as a part-time copy editor at the Gazette was extended a few more times, and though it could see its end after the upcoming two-year mark, I’m grateful for the chance to make all this money doing something I enjoy, so I’m doing this again.

I set up a Feedburner feed for this blog (it should be transparent to existing subscribers, so no need to change feed addresses), and it reports an astonishing 1,126 subscribers, almost three times as much as 12 months ago. Since I have about seven friends, I have no idea who most of those suckers people are, but I feel humbled by the fact they – you – like to read all the junk I post on here.

Last year, I donated $1 for each of my 402 subscribers to Dans La Rue (and, because I like round numbers, I rounded it up to $450). That was enough to get me on their mailing list and on a special pamphlet listing their few hundred largest donors. This year, because I’m cheap [come up with better excuse here], I’ll donate 50 cents for each of those subscribers ($563), and add $1 for each new subscriber between now and a week before Christmas (Dec. 18, for those of you who can’t count).

My chosen charity this year will be the Welcome Hall Mission, which helps the people most in need in this city.

I won’t be giving you sob stories about the poor families in desperate need of assistance. I won’t be showing you pictures of starving African children. I won’t be interrupting your regular programming to ask you to pledge in exchange for a tote bag. Hell, I’m not even asking you to give any money yourself, I’m giving away my money for you (but if you wanted to feel less guilty about that, you could match the measly 50 cents I’m donating for you, and maybe throw on a dollar above that for the two freeloaders on either side of you).

So give it a try. Set yourself up with Google Reader (like 710, or 63% of my feed readers) or another RSS aggregator of your choice, and subscribe to this blog. If you want to unsubscribe after I’ve given my money away for you, that’s cool.

Tell your friends if you want, but I’m not doing any marketing for this (why would I want to aid in the bleeding of my money?). I’m just doing this as a thank-you to my readers, and a way to silence my liberal guilt.

And if other fellow bloggers want to match my challenge (50 cents per existing subscriber, 1 dollar for every new one), I welcome the competition. But if you’re too cheap to put your money where your blog is, I understand. Cowards.

* Eagle-eyed Fagstein readers will recognize part of this picture as the one used in this blog’s header. The picture was taken for use in my freelance invoices. No, really.