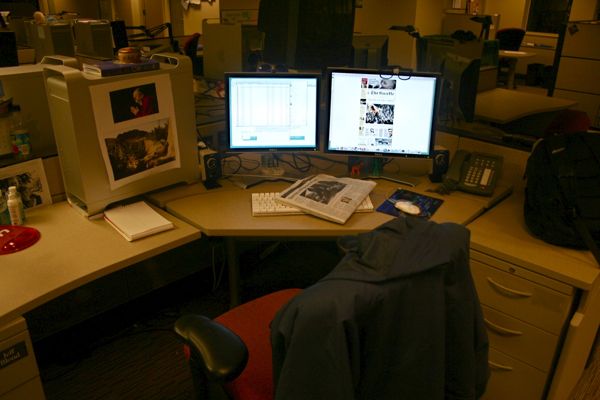 As of 1:30am today, I am no longer an employee of The Gazette (a division of Canwest Publishing Inc.)

It happened so long ago that most of this blog’s readers probably don’t remember, but I was hired as a temporary, part-time worker at The Gazette in January 2008. Back in 2005 I was picked as an intern, and stayed on for an extra year on contract before I was let go the first time. When a vacancy came up a year later because of two parental leaves, I got an email from my old boss asking me if I wanted to come back. I didn’t hesitate.

The contract was supposed to last nine weeks. But it got extended, and extended again, and again. Finally, with the person I was replacing returning to the payroll, my contract wasn’t renewed past Jan. 31. The nine-week contract ended Sunday night at 105 weeks plus a day.

All this to say that the split is amicable (sad for both sides, but amicable). It’s not in any way related to Canwest’s creditor protection filing, nor anything I did. That said, it isn’t completely disconnected from the crisis facing media, and copy editing in particular (the Miami Herald yesterday looked at how many grammatical mistakes make it into a newspaper on a daily basis because of the reduced number of copy editors).

Though I’m obviously not happy about getting dropped out of my dream job, I’m grateful for the opportunity I got to live it for those two years. I want to publicly thank my colleagues, whose help, guidance and awful puns are what I will truly miss most about working there, and what I will most look forward to if I’m ever given the opportunity to work there again. I especially want to thank Assistant Managing Editor Katherine Sedgwick, who was my boss for most of my time there, and who emailed me out of the blue two years ago asking me if I wanted to come back. Her ability to judge character is obviously well above par.

As for my future, it’s up to me to write it now. I have no plans to leave the city unless some irresistible opportunity shows up. And my goal is to stay in the field of journalism. But that’s a tall order with everything that’s happening to the news media.

But I’m not thinking too much about that yet. I didn’t take a single day off while I worked at the Gazette, and so my immediate plans are to make up for that by taking it easy for a bit. My last paycheque doesn’t come for a week and a half, and it’ll include all the banked overtime I never ended up using. That, plus all the money I’ve saved up means I’m not desperate for a job right now, and I can take my time figuring out my next move. And spend more time with my family, I guess. That’s what the politicians do, right?

In the meantime, my loss will probably be your gain. I’ll have more time to blog about stuff. My browser is just about ready to burst with all the tabs it’s got open. I hope to clear some of that out and post some of the ideas that have been circulating in my head this week.

My relationship with The Gazette also hasn’t been completely severed. I plan to continue freelancing for them (notably compiling the Monday Calendar), and am exploring other opportunities, as they say.

Some people have asked if I would consider blogging full-time, monetizing this little experiment I’m running. I’d do it in a second if I thought it could be profitable, but I don’t think that’s feasible yet. I may change my mind on that depending on how desperate I get for cash, or how desperate people are to advertise here.

I certainly won’t be holding my breath for that.

Unless I can turn holding my breath into a job.

UPDATE: I’m really feeling the love, in the comments below and on Twitter. Unfortunately, I can’t trade that in for a career just yet.

34 thoughts on “Another unemployed journalist”