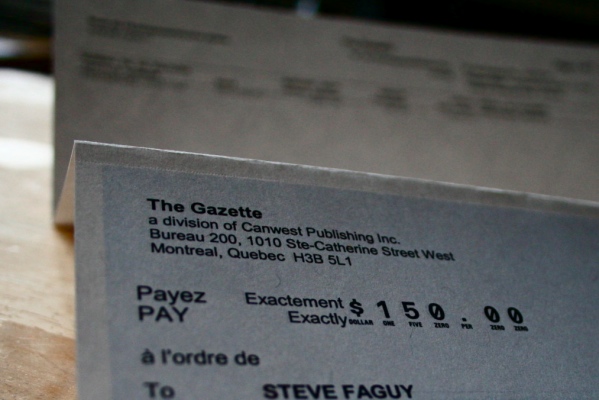 While many people are up in arms that Canwest asked for – and received – retention payments for top executives while it’s under creditor protection, some good news is also coming for those at the other end of the scale.

Freelancers for The Gazette were resigned to the fact that invoices for work published before Jan. 8 would either not be paid at full price or might never be paid, because as independent contractors the freelancers were considered unsecured creditors after the creditor protection filing (all work done after that is covered under a separate agreement and is being paid as normal).

But recently, I’m told, the court-appointed monitor for Canwest LP has authorized the payment in full of outstanding invoices for freelancers. Many of those freelancers have already reported receiving cheques, and the photo above is one I got last week, covering a tiny bit of work that was frozen from the last invoice.

8 thoughts on “Good news for freelancers”