The Gazette’s Andy Riga has a story out today about the 515 bus to the Old Port, and the problems it has attracting riders – particularly as it uses a route that the mayor wants to replace with a tramway eventually.

The problems are familiar to this blog’s readers: the route is confusing with its yellow and blue signs, travels through an area of town (René-Lévesque Blvd.) already served by plenty of transit services, doesn’t do enough to attract and inform tourists, it tends to get stuck in Old Montreal traffic, people in Old Montreal tend to prefer to walk to their destinations to and from nearby metro stations (particularly in the summer), and the new residential developments it was supposed to serve (like the new Griffintown) haven’t yet emerged. 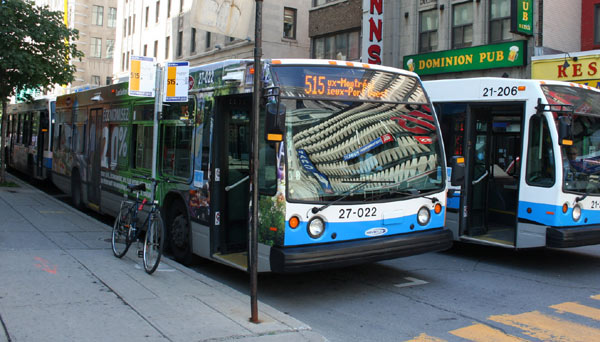 But Riga brings up an interesting point through his access-to-information request and interviews: The STM knew way back in 2007 that a circular route taking René-Lévesque Blvd. would be a waste of money:

A March 2007 study, also obtained under access to information, suggested that the route eventually chosen, particularly the section along Rene Levesque Blvd., would “increase operating costs” and duplicate service offered by “numerous other lines.”

The federal Old Port of Montreal Corp., which took part in the study, favoured the longer route that used Rene Levesque, and that was eventually accepted.

Riga quotes STM planning head Michel Tremblay saying this summer would be a “last chance” for the 515, after which the STM would re-evaluate the chronically underperforming bus route.

The article also says there have been no studies or surveys conducted for the 515 bus since its launch. So I guess I just imagined this detailed survey that was presented to a public consultation by the city last year based on a study of the 515’s use by passengers in 2008. Either that or the STM was unaware of it, which seems silly.

Riga also has some supporting documentation on his blog, which shows the STM predicting some huge spike in ridership in June that hasn’t materialized.