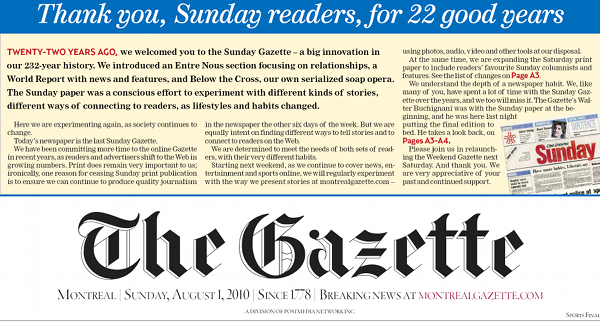 A note atop Page A1 on Sunday thanks readers

So that’s it, the last Sunday edition of the Gazette is on the newsstands now, just over two weeks after the stunning announcement that it would be stopped because of financial reasons.

Other media gave brief mentions of the last Sunday section:

The Gazette itself certainly didn’t hide from this notable moment in the paper’s history. In addition to the giant note above and yet another reminder of how the paper and its contents will change, today’s paper has a retrospective from Walter Buchignani, who was one of many hired to launch the Sunday paper in 1988. He became “Action Man” – doing a different activity every week and writing about it. More recently, Buchignani has worked behind the scenes, supervising the paper’s production over the weekend as the night editor, in addition to his regular Formula One column. (His piece includes a humorous bit about having to call the Living Legend of Sports Journalism, Red Fisher, late at night to do an obit for Gump Worsley). Buchignani was in charge last night, too, as we toasted the final issue. 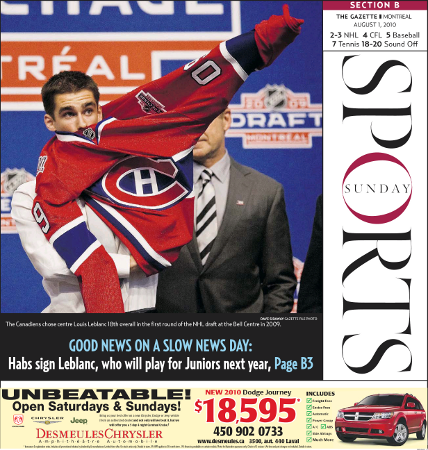 I, meanwhile, had the honour of putting together the last ever Sunday Sports tabloid section. It was a small section, and pretty short on news (no Habs game, no Alouettes game, no big tennis or golf tournaments). The biggest story was the Canadiens signing their first-round 2009 draft pick Louis Leblanc (and his announcement that he would play for the Montreal Juniors next season instead of staying at Harvard), and Pat Hickey pointing out how odd it is that they would release this news late on a Friday night.

There’s also a Stu Cowan column saying Andrei Markov should learn some French, which I’m sure will spark some debate. 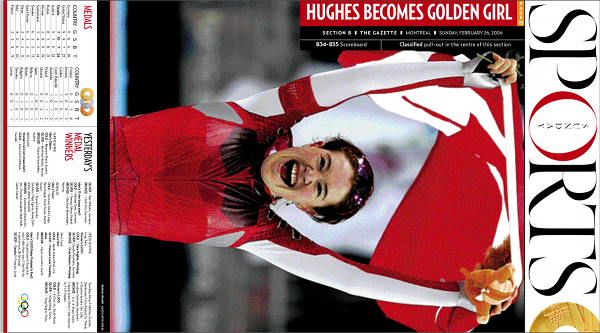 The Sunday tab is young enough that I remember its origins (though I needed a bit of database help to remember the date). It began on Feb. 26, 2006, the day after the Gazette launched the new “Saturday Extra” section in a reorganization of the weekend papers.

The editor in chief at the time, Andrew Phillips, introduced it thusly:

Sunday Sports is now an easy-to-handle tabloid. We think that format is ideally suited to displaying our best sports writing and photographs on the biggest sports  news day of the week. Today, for example, the section opens with a dramatic poster-size photo from Turin of gold-medal skater Clara Hughes.

The poster – which celebrated Hughes’s gold medal in the women’s 5000-metre speed-skating event at Turin (it would be Canada’s last of seven golds at those games, the men’s hockey team having been humiliated in the quarterfinal by Russia) – actually formed both the front and back pages of the 36-page section, an experiment that wouldn’t be repeated. But I saw that particular cover many times over the following months – one Gazette staffer taped it up to the wall like an eight-year-old would do to a poster of their hero. Hughes had that effect on people.

The Gazette didn’t have much experience putting out tabloid sections at the time. The Books tabloid launched only the previous day, while the West Island section was put together as one file in QuarkXPress, something that wasn’t feasible on a three-person sports desk.

There were quite a few growing pains. At first, the section was split up into pairs (the plates were broadsheet-sized, so each tabloid page was paired with a mate as it was typeset), so a 20-page tabloid section (not including the 12 classified pages tucked into it) would have 10 Quark documents. And each document would have the full 32 pages in it (and not in sequential order either), only two of which would be used. After a couple of weeks they got each document down to the two live pages, and eventually managed to split those up so each editorial tabloid page would have its own Quark document (with the exception of the centre spread, which would be in one file).

The Sunday tab was a lot of work for two reasons: first, it was a lot of editorial space. The norm was 20 pages. Take away three for the scoreboard stats (which are done by Canwest Editorial Services in Hamilton), one for the full-page ad on the back and another for the full-page photo on the front, and that leaves 15 pages, or the equivalent of 7.5 broadsheet pages, a pretty large section.

Second, it was laid out in a different way than the section was the rest of the week. Unlike broadsheet pages which would have at least three or four stories, the tabloid pages would have one or two, and each page would have a photo, which meant a photo for almost every story. For the most part, each page would be devoted to one sport (multiple pages in the case of hockey, of course). To me, it always seemed more organized than the broadsheet section, not to mention easier to read.

I’ll miss the fun of laying that out. But I won’t miss the stress of putting it all together on deadline.

Taken from the note to readers, here’s what’s going to be changing next weekend, by section:

Finally, a new section is being added to the Saturday paper, called “Diversions”, which will take all the puzzles and comics pages from the two weekend papers and add a few extras. 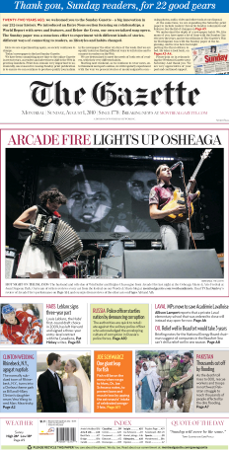 The last Sunday paper left mixed emotions among some editors. It’s sad, but many of them will get their Saturday nights back now.

Not me, though, at least not at first. I’m back at work next Saturday night – on the online desk.

19 thoughts on “No more Sundays”