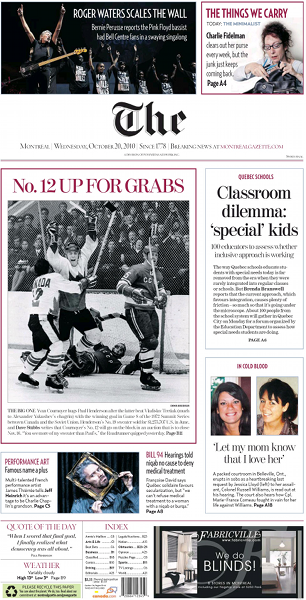 If you picked up the Gazette today and have a keen eye for detail, you may have noticed that the word “Gazette” in the nameplate has been deleted ( the Digital Edition has since been unfixed).

A similar move was done online for a few hours this morning: 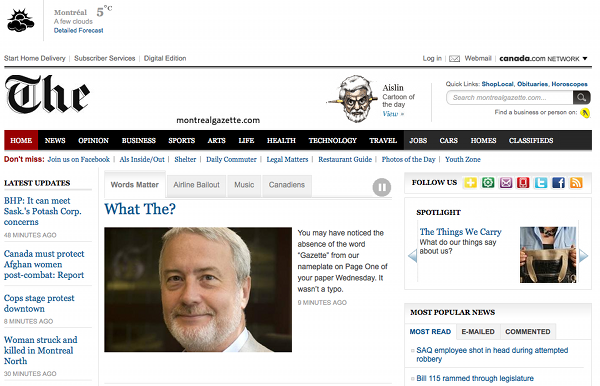 Rest assured, it was done on purpose.

The front-page gimmick, explained on Page A3 by publisher/EIC Alan Allnutt, is a new phase of the newspaper’s Words Matter campaign:

Starting this week, you’ll notice ads on radio, online, around town and in the paper with a new style but the same Words Matter attitude you’ve become familiar with over the past few years. 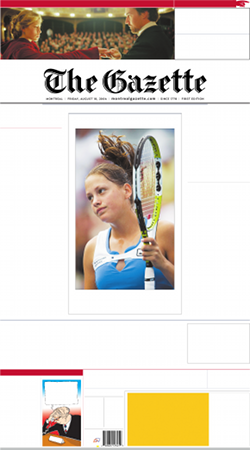 Words Matter began on August 18, 2006, when The Gazette tried a similar stunt by removing all the words from its front page (PDF), with the exception of the dateline and bar code numbers. It certainly caused a splash (certainly in the industry), though some apparently got the impression that the page was some sort of memorial to teen tennis player Stéphanie Dubois, whose picture dominated.

The Words Matter campaign is the brainchild of bleublancrouge, The Gazette’s marketing agency, which recently hired Gazette marketing VP Bernard Asselin as its new president.

UPDATE: You can track a bit of the social media reaction to the move here:

Bleublancrouge has uploaded a radio and TV ad for the Stuff We Carry series so you’ll get an idea of what the new campaign will look and sound like.

MarketingQC has a blog post up about the move, which unlike reaction from the online peanut gallery is pretty positive.

9 thoughts on “Words matter for The”