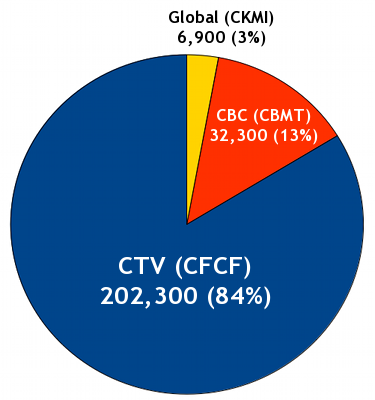 It’s the kind of statistic that can only be visualized in pie chart form: CFCF (CTV Montreal) continues to dominate the ratings of the three local evening newscasts, according to figures Bill Brownstein put out in Saturday’s story about the station’s anniversary (which, incidentally, is today – happy anniversary). It has more than six times as many viewers as its nearest competitor, and more than four out of every five people watching an anglophone newscast at 6pm is tuned to channel 12.

It’s nothing new. CFCF has been dominating the ratings like this for years, ever since massive budget cuts at the CBC caused people to tune away from NewsWatch.

But the public broadcaster is slowly fighting its way back up. Almost a year and a half since introducing a 90-minute evening newscast (that relied primarily on repeating the same stories), CBMT is seeing a ratings spike in the 5-6pm hour.

This is a sign that Montrealers are realizing there’s a newscast at 5pm on CBC, and if for whatever reason that timeslot is more convenient for them, they can get their news from CBC instead of CTV. It’s nowhere near the kind of ratings CFCF gets for its 6pm newscast, but it should still serve as a lesson to CBMT, Global’s CKMI and other stations who trail badly in the ratings department: Unless you have a truckload of money to waste, don’t try to take beat the leader with a bad copy of what it does.

Barr also credits some content changes for the increased ratings. “We’ve been working hard to make the show as relevant as possible to English Montrealers,” she says. “We’ve more clearly defined each half hour.  We’ve increased our investigative reporting by dedicating our Shawn Apel to the beat and by embedding Nancy Wood in Radio-Canada’s investigative unit.  We’ve also added a weekly segment, Jennifer Hall’s “Montrealer of the Week”, which features the achievements of everyday Montrealers.  We also continue to place special emphasis on breaking news, live reporting, and local news and weather.  Seems like the winning formula is starting to pay off.”

(With respect to Apel, who is a solid reporter, an investigative team of one isn’t going to make much of a difference in the grand scheme of things. But I appreciate the effort.)

So where do we go from here? I think CBC should just scrap the last half-hour of its newscast and run a straight hour from 5 to 6, where they have no competition (unfortunately, because too many big decisions are still made in Toronto, that’s not likely to happen here unless it happens everywhere else too). Find places or beats that CFCF either isn’t interested in covering or isn’t doing a good job with, and make those their own.

And what about Global? 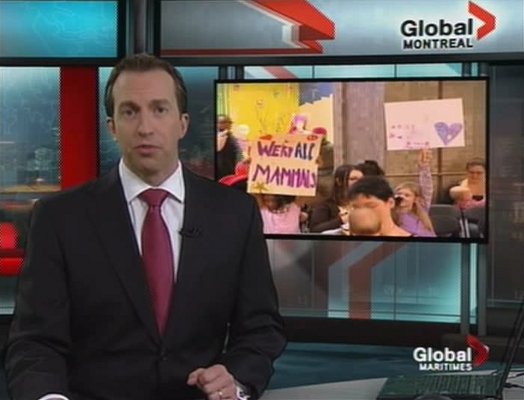 I hesitate to use the word “laughingstock”, mostly out of respect to the small crew of journalists who are trying their best there. But I tuned in to last night’s News Final (it’s the only local anglo newscast between 11:05 and 11:30) to see that it had a “Global Maritimes” bug in the corner. That lasted about 10 minutes until I mentioned it on Twitter and someone fixed it.

Yes, “it’s just a bug“, but it’s a symptom of the larger problem of what happens when you try to run a newscast on the cheap by producing and directing it in another city. I’ve watched the show many times waiting for the weatherman to accidentally give the Toronto forecast (CKMI’s weather is done by the weather presenter at Global’s Toronto station), and to his credit I haven’t seen Anthony Farnell slip up yet.

There’s some hope on the horizon. With Shaw’s acquisition of Global from Canwest, they’ve promised (as part of a government-mandated compensation package) to invest significantly in the stations, among them a new local morning show set to debut in 2012 (four years after This Morning Live went off the air). It’s unclear at this point how much of that would actually be produced and directed in Montreal, but it fills a gaping hole in local news, where the only thing between midnight and noon is a local news ticker at the bottom of the screen during CTV’s Canada AM.

I think CKMI should consider moving its evening newscast, perhaps to 7pm, and either move those stupid celebrity gossip shows elsewhere or kill them entirely. But they won’t, of course. Global, unfortunately, gave up on local news in this market long ago.