Two bargaining units of The Gazette’s production department were locked out on Sunday after rejecting the employer’s final contract offer.

One unit is tiny, representing a grand total of two platemakers (a position the Gazette wants to abolish because of advances in technology). The other is larger, representing 20 full-time employees and many more part-time and temporary employees in the mailroom.

Because of my obvious conflict of interest with this case (and, frankly, my lack of familiarity with the issues), I won’t comment on it. But I’ll post this for the record and link to coverage elsewhere, which discusses the main issues (hours of work is a major one):

Or, of course, you can get it from the horse’s mouths. The Gazette’s story is here. The union’s press release is here.

For the sake of clarity, I’ll point out that most departments at The Gazette are unaffected by this lockout. Editorial, advertising and other employees who work downtown are part of an entirely separate union, the Montreal Newspaper Guild. The people who actually deliver newspapers to your doors (well, the few of you who still get home delivery of a newspaper these days) are also not affected. The plan is for the paper to continue being produced, and so far that is exactly what has happened, with managers filling in for locked-out employees.

In meta news, Montreal City Weblog’s Kate McDonnell has said she will no longer link to Gazette stories online until the lockout is settled (she did the same thing for the Journal de Montréal during its lockout).

And I couldn’t help but notice that someone at Le Devoir seems to have confused The Gazette with an Old Montreal restaurant called gaZette that opened up where the paper’s offices used to be almost a decade ago: 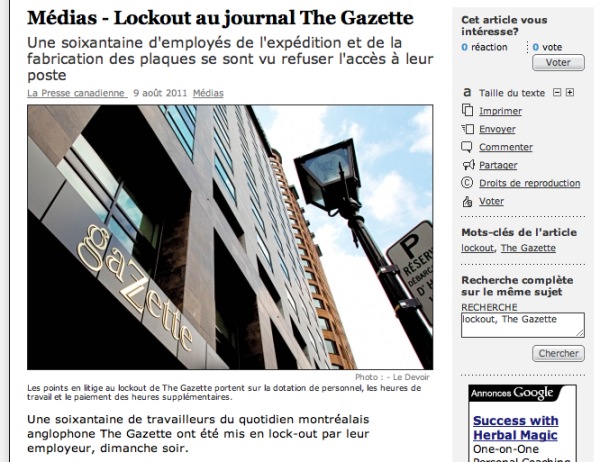 This is not The Gazette

UPDATE: Le Devoir’s error also made it into the print edition, with a huge photo.