As its name implies, Morning News has a focus on the news. People used to Canada AM will recognize the basic structure, even if the difference in technical quality is obvious.

Each half-hour block starts with a mini newscast read by Camille Ross. They seem to have settled on having a packaged local report from the previous night’s newscast and three or four briefs read by the anchor over visuals or with a short sound clip. Weather and traffic updates come together about every 10 minutes (the schedule isn’t at all strict), and that eats up the first half of the half-hour pretty well.

The second half of the half-hour has the feature segments. For the first half of the show, it’s more newsy, with national/international news (also including one packaged report) and Richard Dagenais doing a second newscast-like segment with entertainment or more lighthearted news.

For the second half of the show, the end of the half-hour has an interview with a guest or columnist, done standing up at a table (though sometimes sitting down too). They’re billed as being at 10 and 40 minutes after the hour, though 15 and 45 are probably more accurate. The three-hour show will have three or four of these interviews.

The show is a bit too repetitive for my taste, even though it’s expected that few people are going to tune in for the whole three hours. The local news stories are always the same ones and the entertainment stories are usually the same. Something similar to what CBC Montreal does during its evening newscast, in which it presents the same stories differently (a package reduced to a brief the second time it’s presented, for example) might work better here. Or even just picking a different local news story or brief. You’re not going to get to everything in a five-minute newscast, so why not vary the selection a bit? 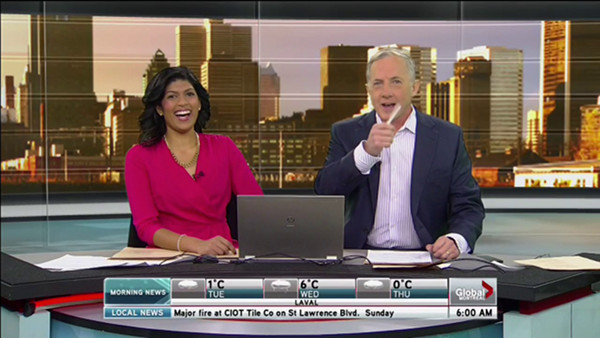 An information bar appears at the bottom of the screen through almost all of the show. It’s pretty simple, with the Global Montreal logo and the time on the right side (Richard Dagenais also says the time out loud every time he starts speaking), the Morning News logo on the left, and local news headlines in rotation at the bottom. In the centre of this box is a multipurpose space, which gives short-term and three-day weather forecasts for Montreal, Laval, Quebec, Trois-Rivières and Sherbrooke, as well as scores from the previous night’s NHL games. (They also had the Super Bowl score the next morning, so supposedly other sports scores would appear here as well.) These graphics disappear (through an animation) and are replaced with text boxes when the control room calls for information to appear on the screen, such as identifying a person speaking or a location.

Other than the cueing of these information slides, everything is automated, so it’s nice and smooth. But it’s already happened a handful of times that the wrong identifying text box has been cued and then quickly made to disappear.

The background in the virtual newsroom set is a sunrise cityscape, which is nice-looking and succeeds in making it look at least a bit different from the evening newscast. But it leads to images like this that make it clear how it’s not real: 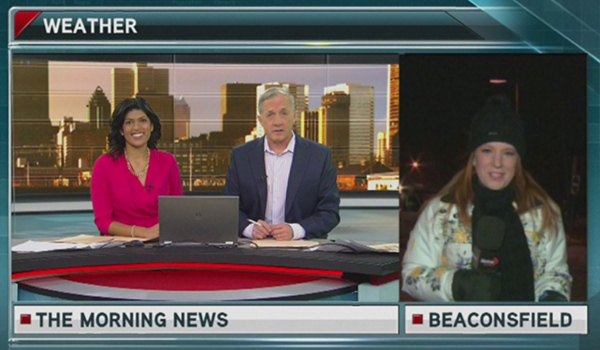 It’s sunrise in the studio, but pitch black outside

Jessica Laventure has experience as a weather presenter, so barring technical problems (like occasionally not being able to hear the hosts) she delivers it well. Reports vary, with daily forecasts, five-day forecasts and national forecasts (billed as “travel forecasts” for the benefit of all those viewers planning trips to Saskatoon in February).

The original plan was to have Laventure report the weather from a West Island breakfast restaurant. By the end of the first week it looked like they had found a place, but on the second week she was back downtown, giving weather updates from Ste. Catherine Street. 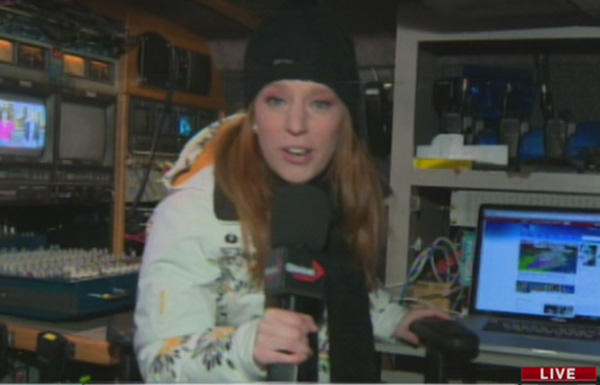 One of the problems with the live remote is that because it’s not HD-compatible, the video is of poor quality. Compared to the crisp HD of the studio, it looks like Laventure is reporting via VHS tape from the 80s, complete with horizontal line noise. (The live hits from Ste. Catherine don’t have this problem because video is fed upstairs through a hard-wired HD-compatible line.)

Looking past the technical issues, the segments aren’t bad, and Laventure gives the show an authentic energy.

Particular praise should go to the crew working with her, cameraman Yannick Gadbois and truck technician Sylvain Trudeau. During the first week, the two of them didn’t hesitate to do silly things in front of the camera just for fun. 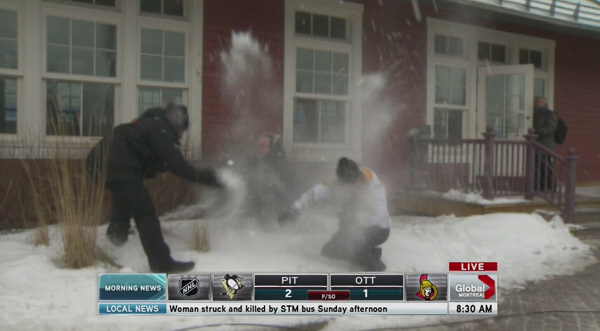 Yannick Gadbois, Jessica Laventure and Sylvain Trudeau have a snowball fight on camera

One live shot used as a bumper before the local headlines featured the three of them engaging in a snowball fight. It’s the kind of thing I wouldn’t expect to see normally, and much more entertaining than a cityscape or live traffic shot.

Gadbois in particular gives the cameraman a personality, and it’s enjoyable to watch on television. 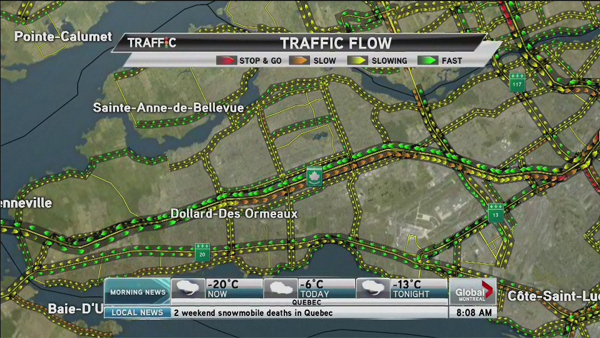 Traffic and weather updates are for the most part presented together. At first, Laventure would follow up her forecasts by reading traffic information off her iPhone that was provided to her by 92.5 The Beat. On the second week, they began having The Beat’s traffic announcer herself deliver the report on the air. The advantage to doing it this way is that it is delivered much faster and more professionally. But it’s also delivered by someone we don’t see.

On screen during these traffic reports, we see automatically-generated maps of various parts of the city with arrows on the highways and major streets indicating how fast they’re moving. Unfortunately, the map usually stays stuck on Laval and doesn’t switch to the downtown map by the time the report is finished.

Ross and Dagenais (and Laventure) are still getting to know each other. That’s not so much a bad thing for a new show. We’re getting to know them too. Some of the chemistry between them might seem a little forced or even fake, and their little running gags a bit overused (yeah, we get it, Richard uses hand cream). But it’s not particularly annoying. Certainly not compared to all the technical problems they’ve had to deal with that have been making them look bad.

(Richard Dagenais’s former job of News Final anchor has been posted, by the way.)

UPDATE: They’ve posted a list of their regular contributors:

The show also has a monthly book club.

Global said Montreal is pioneering a new system with its automated control room. Shaw Media should acknowledge that it’s understaffed and hire another person (a dedicated audio technician would be my suggestion). Global Montreal has only until August to build an audience before City launches Breakfast Television here. If it expects to engage in any serious competition with that show, it needs to act now.

Frankly, it needs to act a month ago, but we’re beyond that. Despite pleas from the people involved to give it a chance, there’s only one chance to make a first impression with viewers. The first week of the show has given them an idea of what to expect. And if Global doesn’t act now to fix it, they’ll quickly turn back to Canada AM and leave Global’s Morning News stuck with the label that I’ve been hearing online from people who have seen it: “train wreck.”

Further reading: Dagenais offers his own, more sympathetic review of the first week, explaining that because everything in the system is coded, unexpected changes throw everything out of whack.