CHRF Radio Fierté, which was supposed to launch this fall at 990 AM, has instead requested a one-year extension and has applied to change frequency to 980 AM in an effort to improve its signal.

When it applied for a frequency change from 990 to 690 in 2011, TSN Radio’s owner Bell Media said the 990 AM frequency was of poor quality, particularly toward the west, and that the station was suffering financially because of it.

The CRTC apparently agreed enough that it awarded the station the much better 690 AM frequency, and gave 990 to a newcomer to the Montreal broadcasting market to start up a music and talk station for the city’s LGBT community.

As it turns out, that new player, Dufferin Communications (Evanov Radio) agrees with TSN: That frequency sucks. So it’s asking to shift slightly on the dial. 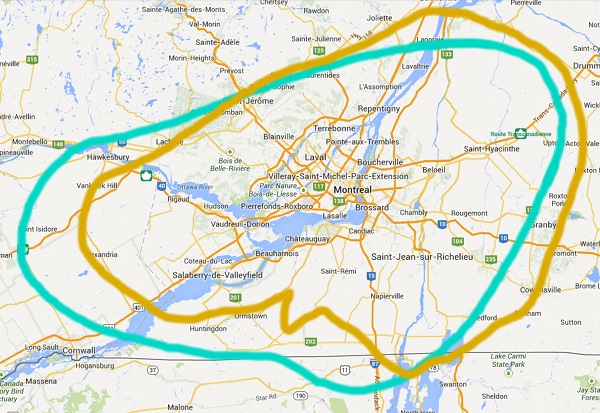 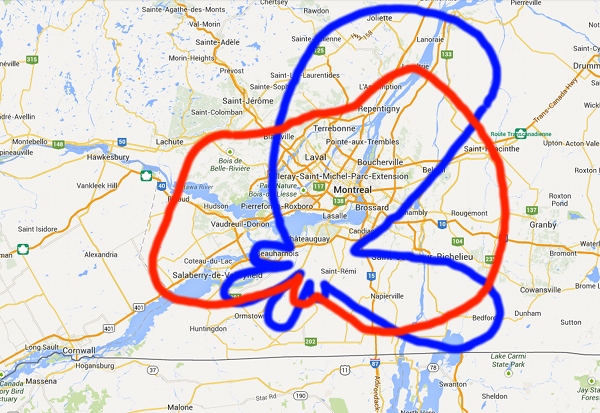 The proposal keeps the transmitter at the same site, the same transmitter in Mercier used by CKGM. But the signal pattern changes, particularly at night, which would go from a narrowly-focused 50kW signal pointed north-northeast, to a rounder 10kW signal that points everywhere but south.

The new night signal would provide much better coverage toward places like Hudson to the west and Granby to the east, at the expense of places northeast like Sorel and Joliette.

The 990 frequency’s signal needs to be this way because of rules that prevent stations of this class from interfering with clear-channel stations at night (when AM radio signals carry much further). On 990, the station has to avoid CBW in Winnipeg and CBY in Corner Brook, N.L., and also has to deal with other stations on the same frequency in places like Rochester, N.Y. and Philadelphia. But 980 doesn’t have any clear-channel stations on it, and while it does have to share the frequency with stations in London, Ont., Troy, N.Y., Lowell, Mass., and Washington, D.C., the signal doesn’t have to be quite as narrow to avoid those stations.

Back to the future

There’s a fair bit of irony here: CKGM used to be at 980, but in 1990, when it was operating as CHTX, it got permission from the CRTC to move to 990 to improve its signal.

So what changed to make 980 more attractive again? The closest station on that frequency is no longer on the air. In the late 1990s, the CBC moved many of its AM stations in major markets to FM. That included CBV 980 in Quebec City, the Première Chaîne station now at 106.3 FM. With no station on that frequency there since 1997, and no one likely to want to reanimate it (since CHRC 800 shut down last year, there are no AM stations left in Quebec City), the door is open to a better signal pointed toward the north.

As Dufferin notes in its brief to the CRTC, it’s no stranger to “impaired” signals. It has a station in Toronto, CIRR-FM (PROUD FM) that is limited to 250 watts because of how congested the radio frequency spectrum is there. It also cited challenges with its 4.85kW signal at CJWL-FM in Ottawa (The Jewel).

“While we had initially taken a ‘something is better than nothing’ approach in our letter of October 24, 2011, Dufferin now believes it has identified a frequency that will permit to deliver a clear signal to its audience and reach its projected levels of profitability on schedule,” it writes.

The numbers seem to back it up: The 0.5mV/m contour of the current 990 signal includes 4.25 million people during the day and 3.3 million overnight. With the proposed 980 signal, that increases to 5.5 million during the day and 4.5 million at night, an increase of 30% and 36% respectively.

“Most importantly, we are also informed by our engineers that the 980 kHz frequency will also alleviate the penetration and reliability issues currently experienced by 990 kHz as a result of operating at a higher power. The nulls and deficiencies of the (990) will be unable to effectively reach the city’s LGBT community Dufferin is licensed to serve.”

Basically, this means that the engineers believe there will be fewer problems receiving the signal between the large buildings downtown than there was with 990.

Dufferin says the additional audience and more reliable signal will improve its financial projections (because larger audience means higher ad rates). With the 990 signal, it projected losing money each of its first six years, and being in the hole by $600,000 by the end of its first seven-year licence term. With the 980 signal, that improves to making money in Year 3 and making $537,000 over the first seven years, closer to the projections it made based on getting the 690 frequency it had originally applied for.

Of course, these are all just projections. We won’t know what happens until the station is actually on the air.

So why is this only coming out now, more than a year and a half after Dufferin was given a licence?

There are a few reasons. The biggest one is that it needed to wait for the frequency to be vacated. That only happened in November, when CKGM ended its simulcast on 690 and 990. In the meantime, Dufferin says it conducted its own study to see if the 990 signal was as bad as CKGM’s owner Bell said it was. It’s conclusion was that it really was that bad, and so it looked at other options.

The option it seemed to settle on was the frequency of 850 AM, formerly used by CKVL. But as it explored tower options for a station on that frequency, the CRTC published another application for that frequency and approved it in June, forcing Dufferin to move to Plan D.

Even if the frequency change isn’t approved, Dufferin says it wants an extra year to launch the station because of all the time it spent trying to find an alternative frequency.

Chances of approval are high

(the company informed me of it directly after people noticed that there was a new entry in Industry Canada’s database for 980 AM). Normally, such technical amendments are treated as so-called “Part 1” applications, which means no public hearing is set, but the public is still given a month to comment. If serious issues are brought up, the commission can hold the application and schedule a public hearing about it.

UPDATE (July 31): The CRTC has indeed published the technical amendment application as a Part 1 application. You can download the full application here (.zip), or file comments here until Aug. 29. Note that all comments and information submitted with them are on the public record.

Applications for extensions to launch services are usually granted without public comment, and there’s little reason to believe this one would be treated differently. Normally a radio station is given two years to begin broadcasting from the date the licence is issued. A one-year extension is usually granted if requested before that deadline, and a second one-year extension if warranted, and further extensions normally denied. The fact that Dufferin has some good reasons for the delay in starting up should mean no problem having this part approved, giving it until Nov. 21, 2014 to launch.

But will the technical change be approved as easily? It’s hard to envision too many parties opposing it. There’s no more AM station in Quebec City, and if someone wanted to start one up they’d probably choose a different frequency anyway. The frequency change puts CHRF closer to the French news-talk station being launched by Tietolman Tétrault Pancholy Media at 940 AM, but the 40 kHz difference is usually more than enough, even in the same city.