To those who have long complained about the lack of English high-definition channels on Videotron, finally some good news: The TV distributor is going a long way in playing catchup to its rivals, upgrading 36 of its English-language channels to high definition, including all of its Sportsnet channels and all of its Movie Network channels.

There’s a catch, though. For Montrealers, these channels will only be available to those with next-generation Illico set-top boxes, which have been used for the past couple of years. The older Scientific Atlanta or PACE boxes (what Videotron calls “Illico 1” internally) can’t decode the MPEG-4-encoded signals that carry the new channels, so they won’t be able to access them in HD.

The exception is Sportsnet 360 (formerly The Score). That channel, whose viewers have long demanded an HD version, will be available to all receivers throughout Videotron’s service area.

Some of the channels (the Movie Network channels, Sportsnet World, U.S. superstations and Disney Jr.) will also be available in the Gatineau/Rockland region, for all HD subscribers regardless of box type.

Outside of Gatineau and Montreal, it’s just Sportsnet 360 and the French version of Disney Jr.

If it sounds complicated, it is. Even Videotron’s vice-president got it wrong a couple of times trying to explain it to me.

So the company is switching to a new compression system. In Montreal, all the new channels (except Sportsnet 360) will be encoded using MPEG-4 instead of MPEG-2, which dramatically lowers the bitrate for each channel. This is why the next-generation boxes are needed. Existing channels are not changing, so if you have an older box you’ll still get the same channels you do now.

This move combines with a very expensive network modernization project that has brought head-ends closer to homes and reduced the size of their cells, both of which are designed to use bandwidth more efficiently to offer more channels and faster Internet speeds.

But still, some HD channels are missing from Videotron’s lineup, and customers who want them will certainly complain that they weren’t added here. They include:

Plus channels that aren’t on Videotron even in standard definition, like:

Feel free to add suggestions below. I should note that Videotron does keep note of new channel requests, and will base their decision to take a channel based in no small part on consumer demand. So if you want something, ask for it. 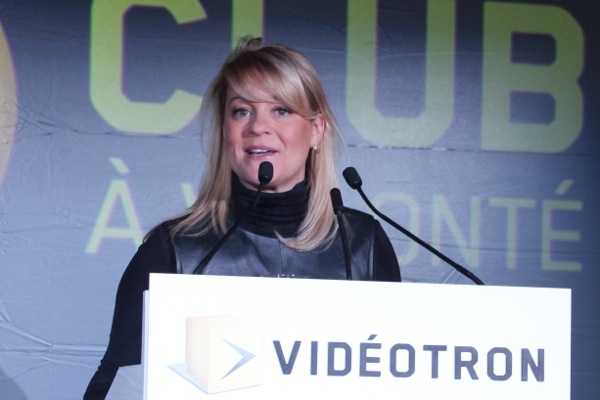 Videotron’s vice-president of content operations and public affairs, Isabelle Dessureault, who is also in charge of MAtv and the MYtv community channel project.

The new HD channels prompted me to write a feature story that appears in Saturday’s Gazette about Videotron’s relationship with anglophones. Isabelle Dessureault, Videotron’s vice-president of content operations and public affairs, told me that the company is under-performing among anglos and has made a stronger effort to improve its offering for them and better compete with … well, you know who. It finally came to terms with AMC after a long negotiation, added premium channels like FX Canada and Super Channel, and has asked the CRTC for permission to launch an English-language community channel in Montreal.

Through our discussion, I got Dessureault to explain, in general terms, why it’s difficult for Videotron to get English content. It’s not for lack of wanting, and technical issues aren’t the only limitation.

Dessureault said that for TV channels, the problems start at the negotiating table. Broadcasters, particularly American ones, demand minimum subscription guarantees or variable wholesale rates. But that’s particularly difficult for Videotron because of it’s custom channel packaging strategy. Allowing people to choose their own channels and not pay for ones they don’t want means the people who own those channels get less money. With 80% of new clients choosing custom packages, minimum subscription guarantees don’t make sense. And variable rates means Videotron has even less of an incentive to include less popular services.

The Canadian government has said it wants to move toward freedom of choice in TV packaging. The CRTC has repeatedly indicated it wants to encourage this as well. And some providers, particularly smaller ones, are trying to do just that. But it’s not that easy with the contracts that are signed with various broadcasters.

Dessureault said there’s only so much that can be done about the problem. The CRTC has no jurisdiction in the United States, so it can’t force CNN, AMC, Spike TV or A&E to accept contract conditions they don’t want. But she said that if more Canadian distributors moved toward so-called pick-and-pay systems, the big U.S. players might accept no-guarantee channel carriage as the cost of doing business in this country, and negotiations might go easier in the future.

There are also non-linear content distribution methods, like Videotron’s new Illico Club Unlimited, its answer to Netflix. The company admitted when it launched that it had very little to offer to anglophones. The focus was on French-language content, where Netflix is weak. Dessureault said she wants to see more English content on the service, but explained why the business case for it is bad.

Simply put, English content in a subscription video-on-demand service is six times more expensive to acquire than French-language content. And Videotron has far fewer anglophone clients than francophone. Added to the fact that Videotron just doesn’t have the same financial resources as Netflix to acquire content, and it just doesn’t make sense in the short term to buy English content for this platform.

Of course Videotron made a 15% profit margin, or $15 million in profit last year in TV service, so don’t cry for them too much.

UPDATE (Dec. 4): The channels are all live now, along with two holiday fireplace channels that are part of the Galaxie service. They’re on channel 552 (with francophone holiday music) and 553 (with crackling sounds). Videotron hasn’t created a map or anything to show which people have access to which channels where. Instead, it’s asking people to contact customer service and is telling them individually.

For all digital HD subscribers

For all digital HD subscribers outside Montreal, and those in Montreal with next-generation Illico boxes