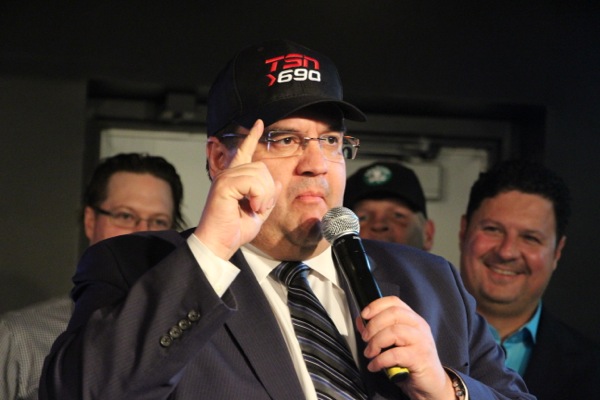 The ratings for March, April and May in Montreal were released by BBM Canada last week. And in general they show no real difference from the previous report that came out in March. On the English side, CJAD remains the most popular station by share of listening hours, followed by The Beat, Virgin, CHOM, CBC Radio One, TSN Radio 690 and everyone else.

The Canadiens’ deep playoff run, which ended four days after the ratings period did, obviously had a lot to do with that, not only because of people tuning in for the games, but listening to shows throughout the day for news, analysis and more.

Chris Bury, program director for TSN 690 and CJAD, agreed that the Canadiens were a big factor, but said the effort the station made around that also made a big impact, things like being present at fan events outside the Bell Centre, or sending Mitch Melnick to broadcast live from Boston and New York. He also said the station may be profiting from the fact that it’s the only all-sports radio station in either language in the city, though BBM shows only a 0.1% share of the station among francophones overall.

It was suggested that cross-promotion with CJAD might also be boosting TSN’s ratings, but Bury said he didn’t think that had much of an impact, since the numbers didn’t show TSN gaining at the expense of CJAD.

Breaking it down, TSN is about the same in the mornings, but showed big gains among adults 25-54 in late mornings (Tony Marinaro), at noon (Marinaro and Chris Nilan), early afternoons (Nilan), and afternoon drive (Melnick). Weekend ratings were pretty well unchanged.

So does this mean TSN’s going back in the toilet now that the Canadiens’ season is over? Well, fortunately for the station, another big event is just starting up: the World Cup of soccer. TSN Radio 690 is an official broadcaster, and apparently the only one in Montreal, so they’re hoping to get a ratings boost from that.

The Beat still ahead of Virgin among anglophones, but …

Once again, The Beat can lay claim to being the No. 1 English music station in Montreal. But then again, so can Virgin. And both of them are.

Among all anglophones, The Beat has a 17.6% share and Virgin has a 15.4% share. That’s the basis for The Beat’s claim. But when you add in francophones, which is a much larger market, Virgin beats The Beat. More importantly for advertisers, Virgin is still well ahead among adults 25-54 where the real money is. In fact, among adults 25-54, The Beat is third behind both Virgin and CHOM. Among women 25-54, it’s second, at 28% to Virgin’s 36%.

The Beat is gaining slightly among young listeners 18-34 but is still well behind Virgin in that category, 39% to 28%. It can also claim a moral victory by surpassing Andrew Carter’s CJAD morning show among adults 25-54 to climb into third place. (Carter’s show remains the most popular overall.)

On the other hand, The Beat has fallen from first to third in late mornings. CHOM’s Tootall actually is No. 1 in that hour among adults 25-54, followed by Virgin’s Andrea Collins and The Beat’s Donna Saker. The Beat also fell slightly behind Virgin at noon, and slightly behind CHOM in third place in the afternoon drive.

On the French side, not much has changed. CHMP 98.5 is still the most popular station overall and among adults 25-54. Rythme FM, Rouge FM, NRJ and CKOI follow in that order in both categories, same as last time.

If NRJ was hoping to make a splash by changing its music to a more pop-rock format, it hasn’t yet. It could try doing what its sister station in Quebec City did, hiring a well-known star of the “radio poubelle” who boosted ratings by more than 400%. In fact, there’s a rumour that a shift to an all-talk format could be in that station’s future.

10 thoughts on “Radio ratings: Best book ever for TSN Radio 690”