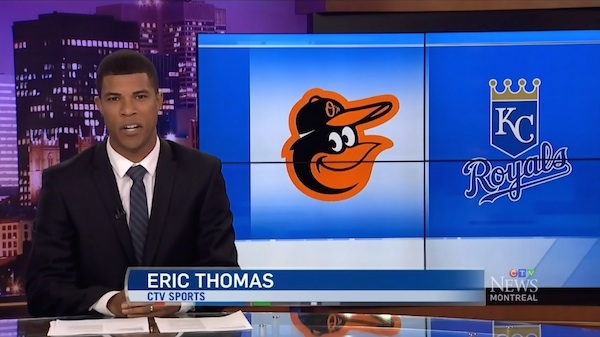 The hiring of Chantal Desjardins as Sportsnet’s Montreal correspondent has shortened the depth chart at CTV Montreal’s sports desk, so someone at the station had the brilliant idea to just grab the guy doing sportscasts at TSN 690.

Eric Thomas brought his slick voice and a look to match across the street and made his debut as a CTV Montreal fill-in sports anchor on the late-night news Friday. You can watch the newscast on CTV’s website, with Thomas starting around 14:15.

A first live newscast is usually a nervous, error-filled affair but Thomas barely missed a beat, looking like he’d been doing this for years. And really, he has, just not in front of a television camera.

Been doing this job 30 years. That was best first cast I have ever seen from @ATL2MTL Congrats Eric. A bright TV career is yours to seize.

Expect the Atlanta-born Thomas to be seen as well as heard a lot more in the years to come.