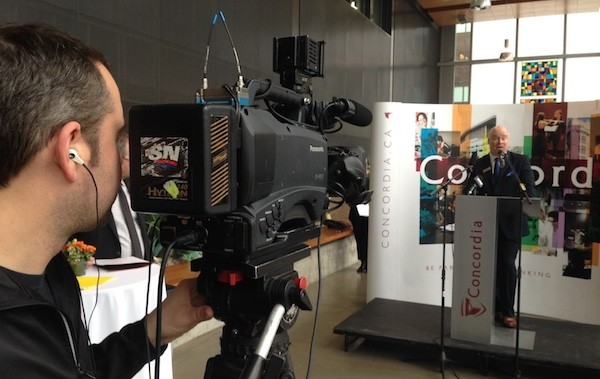 Concordia University journalism students will be getting a financial boost in the coming years thanks to a $650,000 donation from Rogers Sportsnet.

More than half of the donation will be used for scholarships for students over five years:

This works out to $75,000 a year, or $375,000 over the five years of the program. The rest of the money will be used for things like new equipment purchases and other stuff whose details haven’t been finalized, said Concordia journalism department chair Brian Gabrial.

Other than the $8,500 prizes listed above, the scholarships are not specifically sports-related. 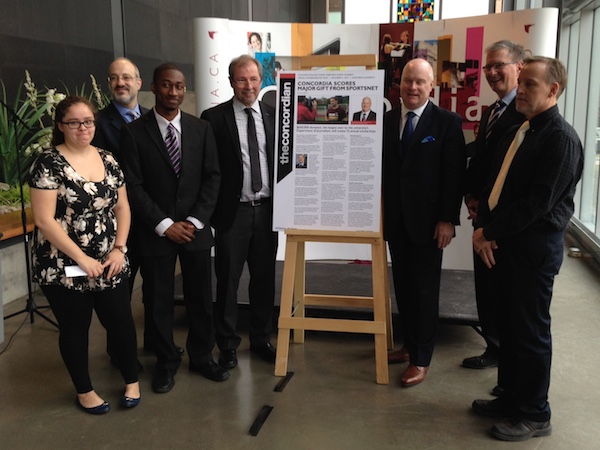 Students and staff at Concordia celebrate their donation with Sportsnet president Scott Moore (third from right).

The donation, the largest in the department’s history, was celebrated with a wine-and-hors-d’oeuvres event at Concordia’s journalism and communications building on the Loyola campus on Wednesday, with Concordia president Alan Shepard Sportsnet president Scott Moore in attendance.

But while this is great news for the university, it’s worth noting where this money is coming from. It’s not something Rogers is doing spontaneously out of the kindness of its heart, but rather a mandatory funding initiative linked to Rogers’s 2013 acquisition of The Score (which it turned into Sportsnet 360).

When the Canadian Radio-television and Telecommunications Commission approved the acquisition of the sports news television channel in 2013, it mandated that 10% of its purchase price (valued at $172 million) be spent on tangible benefits, or donations to programs and initiatives that benefit the broadcasting system as a whole. This is the CRTC’s way of mitigating the loss of diversity that comes from consolidation of ownership.

Rogers had originally proposed more than half of that going to something called the “Sportsnet Winter Games”, an annual amateur sports event. But the commission rejected that, saying it was worried that this would be self-serving. Instead, Rogers broke down the proposed benefits as follows:

Moore confirmed that the $650,000 donation to Concordia comes out of this tangible benefits package, which has to be paid out over five years. He said internal bureaucracy at Rogers, combined with some major distractions, caused them to get a slow start on this.

Gabrial credits Bob Babinski for helping get this done. Babinski worked with Moore at CBC Sports, and after Moore moved to Rogers Media, he hired Babinski to launch City Montreal. Moore said he called up Babinski and asked about Concordia’s journalism program, and then Sportsnet approached Concordia asking them to put together a proposal.

Moore referred to the donation as an “investment” in the future of journalism. That’s a nice sentiment, though the CRTC rules prevent any quid pro quo.

Other Sportsnet university initiatives include the Sportsnet U Recruited program. Its first recruit is Julian McKenzie, a Concordia journalism student, former sports editor at The Link and producer at CJLO 1690 AM. After the event, McKenzie had lunch with Moore. 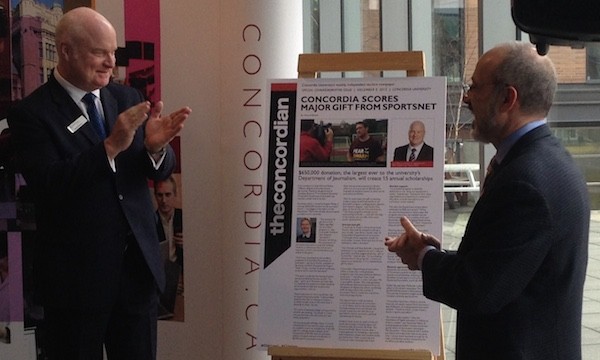 3 thoughts on “Concordia students get $650,000 out of a Rogers acquisition”