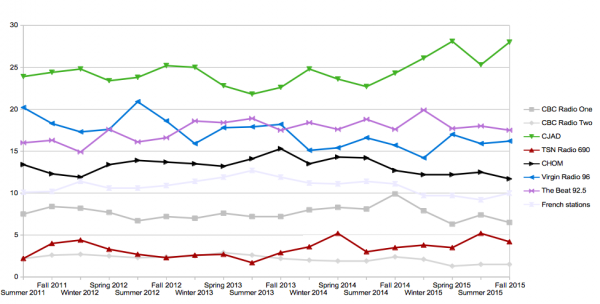 PPM radio ratings came out this week. And while there isn’t much that’s headline-grabbing on the anglo side, there’s a few things I noticed that are worth mentioning.

The top-line numbers show that, once again, CJAD is the most popular radio station among anglophone listeners. No shock there. And when you look at the chart above, you can see that over time their share has actually grown. Its their fourth consecutive book above 25%, after years of never getting above 25.2%.

Among the music stations, The Beat is once again the most popular overall (among both anglophones and francophones), but among the important demographic of adults 25-54, Virgin Radio beats it by five points, and the trend is in Virgin’s favour. Among younger adults (18-34), Virgin beats The Beat by nine points.

CBC Radio One, which peaked in the fall of 2014, has been declining since, with a 6.5% share overall. CBC Radio Two is at 1.5%, the third consecutive quarter at that level or below after being above it for at least four years.

One thing that Numeris has changed about how it reports to the public is that it’s now including overall average minute audience for the stations. This is useful because it gives an indication of how many people are actually listening to the station on average, and if the total number of people listening to radio goes down, so does this number.

Here’s how many anglophone listeners (ages 2+) each station has on average in the Montreal area, 24 hours a day, rounded to the nearest hundred:

Note that this is an average throughout a 24-hour day, so the numbers during peak hours will be much higher than this.

The fact that The Beat has slightly more francophone listeners than franco music station Énergie (which just underwent a rebranding and schedule shuffle) adds to the evidence that francophones in Montreal don’t want to listen to radio stations handcuffed by their obligation to air francophone music.

Bell Media’s sales people do their quarterly breakdown of the numbers, looking at which commercial (i.e. ad-selling) stations are ahead among 25-54 audiences at various parts of the day:

On the other side of the language divide, there’s been some major changes this fall. NRJ rebranded as Énergie and changed its lineup. The station once known as Planète Jazz and Radio X has relaunched yet again, this time as 91.9 Sport. And Radio Classique has changed its lineup following its sale to Gregory Charles.

Only one of those changes has made a difference in the ratings: 91.9 Sport saw its audience among young adults (18-34) spike, from 1% to 4%. But overall the needle hasn’t moved much for that station from where it was under its previous incarnations.

CKOI saw a noticeable increase in its daytime audience. But otherwise there’s not much in this ratings report to write about.

In Quebec’s other markets, whose top-line data was released last week, there’s a lot more interesting changes to note:

If you want to explore the numbers for yourself, you can see Bell’s analysis here or watch their francophone webinar: