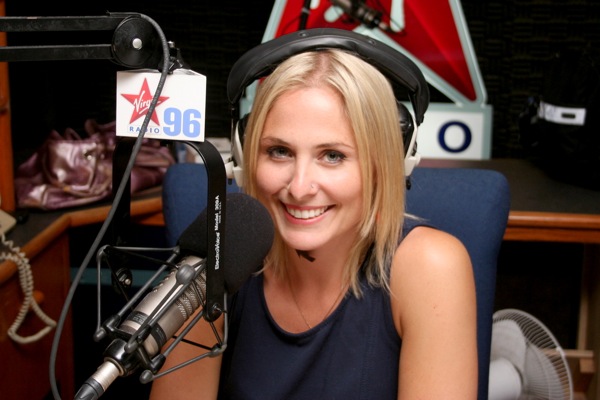 She made the announcement last week on social media, and today was her last day, which prompted a surprise sendoff from her coworkers.

Collins was hired by Virgin in 2011, after previous radio jobs in Winnipeg and Victoria, to replace Nat Lauzon, who bolted for The Beat. Then, after Cousin Vinny Barrucco did the same, she was moved to afternoon drive, becoming the first woman in this market to host an afternoon show solo at a music station. She later moved back to daytime when Mark Bergman went back behind a microphone.

When I profiled her for a Gazette feature in 2013, she described her career as a series of being in the right place at the right time. I think that downplays her talent, but there’s also some truth to it.

No announcement has been made about who will host from 9am to 1pm weekdays now (or maybe it was and I missed it, just like I missed this announcement more than a week ago). A job posting for on-air host at Virgin was made last week.

Today is my friend and colleague's last day at @virginradiomontreal @andreaonairmtl is moving to Virgin Radio Toronto! I am super proud and very excited for her next adventure. Andrea is a huge talent and T.O is lucky to have her! Time to pass the torch…I mean, Virgin Mary to the next MTL radio star. Congrats and we'll miss you!! Ciao for now AC!

One thought on “Andrea Collins leaves Virgin Radio 96 for Toronto”