I spent this afternoon observing a taping of some segments of Tivijournal, a French sketch-comedy show produced by former UQAM journalism students.

The juicy bits will have to wait until the article comes out next Saturday, but for now you can mark your calendars for Wednesday, April 4 at 8:30pm, when they’ll be making their next showing (free) at the Pas Sages bar on Rachel. Coincidentally, the next Yulblog meeting will be the same night, at the same time, right across the street at la Quincaillerie. Tivijournal is usually on Tuesdays, so this should be a one-time thing.

If you don’t know why the title of this post is funny, you missed out on some seriously funny improv. After catching the first two periods of tonight’s glorious victory, I went with some friends to see the final rounds of the McGill University Improv Summit, where seven teams from Quebec and Ontario competed to see who was the funniest on their feet.

END_OF_DOCUMENT_TOKEN_TO_BE_REPLACED

Hey, remember this guy from Page A3 of yesterday’s Gazette?

Boy does he have a creepy face. I bet he’s guilty. 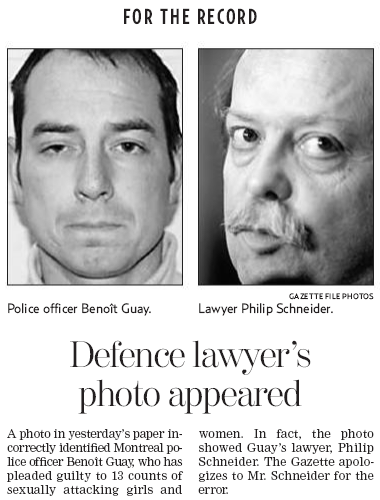 At least they didn’t accidentally identify a lawyer as a terrorist.

UPDATE: Regret the Error noticed it too, but my screenshot is much better, no?

Speaking of boneheadedly obvious newspaper endorsements, Le Devoir is officially backing the PQ, though with concerns about sovereignty, which it says must be a decision of a clear majority of Quebecers.

The easy-to-update nature of blogging software has allowed a lot of interesting websites to spring up. Most are the usual personal blogs, photo blogs, webcomics, but some are beyond explanation.

Among those on my bookmark list are Indexed, which features nothing but Venn diagrams on index cards, there’s the made-in-Montreal Regret the Error, which follows newspaper corrections, there’s Worst Than Failure (formerly The Daily WTF), which has snippets of horrible computer code, and Overheard in New York, a collection of weird and funny quotes anonymously overheard which has spawned countless copycat websites around the world.

Now Hippopocampe points us to WTFCNN?, which highlights the more eyebrow-raising headlines on CNN’s website, usually about oddball stories.

As if enough of my day isn’t filled with reading silly things online.

P.S. Now’s about the time to give a shout out to my new favourite web comic: Saturday Morning Breakfast Cereal.

André Boisclair, I guess thinking that he wasn’t getting enough controversy, has decided to weigh in on the latest reasonable accomodation debate involving Muslim women that somehow has become an issue only during this election (did Muslim women not vote in 2003?). The odd thing about it is that yet again Boisclair is taking the “it’s unreasonable” side of the debate. I thought the PQ was supposed to be the left-wing party? And I thought left-wing people were pro-Muslim? They are at Concordia at least.

Then I think back to Boisclair’s major talking point: “The regions.” He’s not courting votes in Montreal, he’s going after rural communities. The poorer, Catholic, xenophobic areas like Hérouxville that could go to any of the three parties. So while his party thinks of itself as enlightened (after all, it elected an openly gay leader), he’s pushing it into Reform Party-like xenophobia.

Meanwhile, Peggy Curran is implying that activist students, who were denouncing Charest and Dumont (but didn’t seem to mention Boisclair), are taking a pro-PQ stance, despite claiming they’re not partisan. I wonder if these students agree with the PQ leader’s interpretation of what a reasonable accomodation is.

Dumont is apologizing for a candidate in Abitibi-Est whose “business” website apparently accused Jews of a worldwide financial conspiracy or something, while discussing “questions of international finance and banking in an awkward way.” Sure, if by “awkward” you mean “complete nutcase.” Oooh, let’s make all the links move back and forth and choose random colours for everything. I’ve seen 12-year-olds make better websites on MySpace. And read more coherent economic analyses from them too.

I can’t seem to find the offending text through the WayBack machine, though its latest version of the site is from a year ago.

The Gazette’s Saroj Bains has videos up of the three campaign buses: Kevin Dougherty on the Liberal bus, Hubert Bauch on the PQ bus, and Mario Dumont gives a tour of the ADQ bus. Apparently a fancy coffee machine is enough to keep the reporters in line.

The meta-media is all atwitter about a joint story between the Ottawa Citizen and Globe and Mail (also: National Post, Victoria Times-Colonist) about a con artist who got himself into witness protection (despite his information being fictional) and eventually killed someone using his new identity. Except, because of the witness protection rules, they can’t give any details about the murder or his life after entering the program.

Despite that nagging absence, the story still reads like a Law & Order story.

Adrian takes us back to Canadian television of the 80s, including childhood memories The Edison Twins and You Can’t Do That on Television, the latter of which I just saw homaged in a Robot Chicken sketch. Oh that green slime…

Apparently Daybreak this morning had a debate between Apathy is Boring and Nous on vote pas. You can listen to it online if you have RealPlayer. But really, who uses RealAudio anymore?

OK, maybe not so much the bamboo, but Montreal’s transit commission has announced that it’s expanding its Biobus project from five years ago to its entire fleet, and will be testing hybrid buses over the next year.

Midnight Poutine has a short profile on Souvlaki George with photos that make me want to run out right now and eat there. Fortunately they’re only a couple of blocks away.

Andy Riga has some picks for favourite Quebec election videos, but this one (via 321Blogue) takes the cake by simply choosing some good video and creatively slowing it down to make Jean Charest and Mario Dumont appear completely wasted.

Meanwhile, at least one independent candidate (in Outremont) has a website up that puts some of the major party ones to shame. He’s financing his campaign through his videos (the sites are starting to pay contributors whose videos generate lots of traffic), but at about 150 views so far he has quite a ways to go.

UPDATE: For those worried he was left out, Drunk Boisclair is here.

In a stunning first for Quebec media, The Gazette has come out in support of the new left-wing Québec solidaire party in next week’s election, heralding their bold new vision away from politics as usual.

The Gazette’s Kevin Dougherty ran out of election news, so he’s telling us how the press conference went. Interesting to note that reporters pay over $6,000 plus expenses to do a tour on the campaign bus. For a 30-day tour, that amounts to $200 per day, which is about as much as these journalists get paid.