There’s a story in The Gazette today by me (you’ll have to take my word for that, since my byline accidentally disappeared during editing — my editor has promised alcohol as compensation). 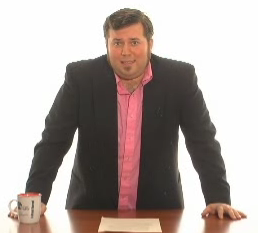 It’s about Tivijournal, a group of young journalists who poke fun at Quebec media and politicians in a monthly satire show. I interviewed them last month as they were preparing their March episode of post-election humour. Pictured above is Félix B. Desfossés, the charismatic host who looks far more confident than he is in his trademark pink shirt and exposed chest hair.

Some things not included in the article: