Creative Commons Canada has produced a podcasting “legal guide”, which deals mostly with copyright, trademark and other similar concerns. It’s comprehensive in that sense, but there are plenty of other issues that podcasters should be aware of, like libel.

A march is being planned for Friday at noon at the corner of Parc and Sherbrooke to protest for aboriginal rights.

It’s part of a nationwide “day of action” (I see that phrase used a lot, but I’m unclear on what it’s supposed to mean) for aboriginal rights in this country. At issue (not to imply that these aren’t perennial issues) are aboriginal poverty and land claims, among other things.

Other events are happening in Kahnawake, on the other side of the Mercier Bridge.

Canoe.ca has undergone a redesign. And it still sucks.

The French version, especially, is a vast improvement over its disaster of a “portal”, but for some reason they’re following the same mistakes everyone else is making in trying to “go Web 2.0”, not knowing what the heck Web 2.0 is all about:

Look for another massive redesign in a year or less when the folks behind Canoe.ca realize their layout sucks and nobody can find anything.

Tremblay’s side has some valid points:

On the other hand, he doesn’t answer some of Chris Hand’s main criticisms:

Either way, unless these two can start talking to each other like humans, a judge is going to decide which story is more sympathetic. And lots of money and time is going to be wasted on both sides.

Kate McDonnell has a piece on UrbanPhoto re-exploring the Laval metro extension, now that the opening weekend crowds are long gone.

For more pictures and information about these new stations, be sure to check out Matt McLauchlin’s excellent Metrodemontreal.com profiles of the stations. 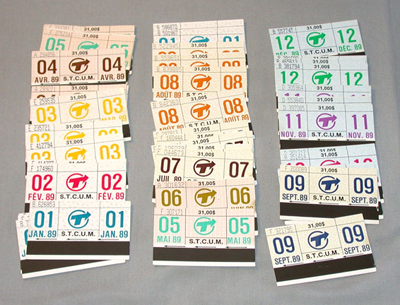 (Don’t let the picture deceive you. For sale are 1990 bus passes, while pictured are 1989 ones. That’s false advertising, man.)

The case of David H. Wall vs. Christopher Haney and Scott Abbott may finally be settled.

For those who need a refresher, Wall sued Haney and Abbott, the creators of the Trivial Pursuit board game, in 1994, claiming Haney stole the idea for the game from Wall. Wall was hitchhiking one day when Haney picked him up (or so Wall says) and that’s when Wall apparently laid out in explicit detail how the game would work, enough that Haney stole his idea. Right.

A Nova Scotia Supreme Court judge dismissed Wall’s case, pointing out that Wall doesn’t have a single shred of evidence beyond his self-serving testimony to support his claim.

This isn’t the first lawsuit Trivial Pursuit’s creators have faced. In 1984 they were sued by the creator of the Trivia Encyclopedia for copying their questions and answers. They admitted to it (they were caught red-handed copying a made-up question), but argued that facts cannot be copyrighted. A judge agreed and dismissed that case too.

The Trivial Pursuit origin story always interests me because it was created by a CP sports editor and a Gazette photo editor. According to Gazette lore (read: old-timers’ occasional rants), the two went around seeking investors from among their journalistic buddies, and most chose to hold on to their money. The phrase “I could be retired by now” would inevitably follow, along with wet grunts and smoke-filled phlegm.

Now they can go on to regretting the past two and a half decades of their lives.

CBC has a story on how “gambling critics” are waging a campaign against Videotron for a channel on its digital cable network it says glorifies gambling.

The channel in question is CGTV Canada (Casino and Gaming Television) which can be found on channel 59 on Videotron’s Illico digital TV service (it’s not on classic cable — but for some reason it’s included as part of Videotron’s required base channel lineup, along with local broadcast stations, CPAC, The Weather Network, Newsworld and other important cable channels).

The charge is being led by Sol Boxenbaum, who in addition to being an anti-gambling crusader (he’s sued the Quebec government over VLTs) hosts his own very-very-late-night talk show on CJAD. His principal argument is that digital cable subscribers have no choice on whether or not they should have the channel as part of their TV lineup, and that THE CHILDREN might see it and cause untold harm on society.

Of course, the first question that comes to my mind is: Why now? CGTV (formerly The Gaming Channel) has been licensed for six years now. They’ve been on Videotron’s basic digital lineup for more than a year. And there are other all-gambling channels on the way: The Players Channel, The Wagering Network and Gambling TV.

The Alouette with the coolest name on the planet, Uzooma Okeke, has been cut from the team. Football will never be the same.

I could spend this post complaining about how my two-week-old futon is broken in two places already, but there’s something far more important to be mad at Ikea about:

They’re not taking care of their flags.

Wow. The assignment editors must be really stretching.

A comment about the CP article on police presence: Was the holiday really “often known for violence”? I know hard-liners do their hard-liner thing, but was it really enough to make the entire holiday appear violent? Or is this just an example of a reporter talking out of his or her ass?

A small group of students from JFK High School in St. Michel are visiting hydro-electric power plants in James Bay and chronicling their trip in a blog.

I find the text flows well, the metaphors are very powerful, the news is current, and the ideas really get the wheels turning in your head. And other bad puns.

Back when I was in high school, I didn’t read books. Not because I couldn’t, I just didn’t like them. Even now I don’t own any novels, rarely read biographies, and my bookshelf consists of Star Trek technical manuals, old Garfield books, and some computer science and philosophy textbooks I still think are interesting.

So the library wasn’t exactly my place to be. I still went there for the computer books and other non-fiction instruction books, but you’d never find me in the fiction section.

One day, I was researching a school paper in the local library (Shout-out Pierrefonds/Dollard-des-Ormeaux Intermunicipal Library! Yeah!). These were the days before Google, so I actually had to look at books to find information. I was walking down the aisle and I happened on this book about statistics. I couldn’t remember what the title is, though it was a play on “Lies, Damn Lies and Statistics”. I flipped through the pages and started reading.

I read the entire book cover to cover. It was fascinating (well, fascinating for a teenager who didn’t have access to Wikipedia, anyway). It talked about advertisers using bad statistical math saying things like “200% off” and how that makes no sense.

I credit my high-school English teacher for getting me to read more. She was a forest’s worst enemy, photocopying Shakespeare, Chaucer, and mythology texts from all over the place. We needed three-inch D-ring binders just to hold them all. I still have mine at home, and will probably read it one day when I can finally understand it.

When my mother told her I went into journalism and became a writer/editor, she apparently laughed. I don’t blame her. I was a mathematician who had no room for English back then, and the English teacher was always my worst enemy. She turned out to be one of my favourite teachers.

Anyway, getting back on track, the Canadian Freelance Union, a new group trying to secure rights for freelancers with big media corporations (a long battle if there ever was one) released its first newsletter. In it (and on its website), it says freelancers’ real income has dropped by 163%, taking inflation into account, over the past three decades.

The number, of course, makes no sense. Unless we’re paying publishers to use our content (I wouldn’t put it past some aspiring writers to make that offer, mind you), income cannot be below zero. In reality, the average freelancer income has stayed constant, while inflation has made everything else 163% more expensive. That means buying power has decreased 62%, not 163%.

I know journalists aren’t supposed to be good at math, but numbers like this should at least be put through a sanity check before they’re published.

Remember way back when, when freelancers were up in arms over a new CanWest contract that demanded all rights “in perpetuity throughout the universe?”

After the uproar that caused, CanWest quietly backed down and started using its previous contract.

Now, apparently, they’re at it again, and some people are taking notice.

END_OF_DOCUMENT_TOKEN_TO_BE_REPLACED

For those who missed it, there’s plenty of photos from last night’s Flickr party. Martine even has a video.