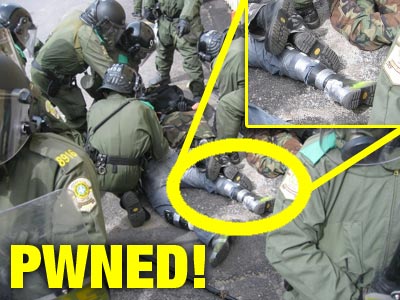 The Sûreté du Québec are admitting that they did use undercover police officers at the protests in Montebello. The article doesn’t make it clear that they’re referring to the same officers in this video, which has gained traction in the press lately.

But the official SQ statement on the matter makes it clear: They’re cops.

Though I still agree with some that say the evidence was far from conclusive, with the amount of media attention this was getting it was just a matter of time until the government was forced to respond.

Now come the fun questions: Are all the extremist elements of these protests actually undercover cops? Are some of the more recognizable activists (*cough*Jaggi Singh*cough*) actually cops? Were these guys just holding rocks to keep their cover or were they actually expected to throw them at their colleagues? (CP says they never threw any rocks and that’s how their cover was blown)

The biggest question, of course, is what is the point in all this? The police had previously acknowledged that they used under cover agents to tell what plans were in advance. But what’s the point of planting someone who’s going to throw rocks? And if just throwing rocks at armored police isn’t such a bad deal, why are protesters tear-gassed, pepper-sprayed, arrested and beaten for it? 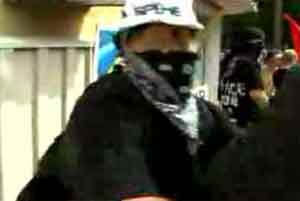 In the meantime, union leader Dave Coles should file a complaint of assault against this officer for a shove about 48 seconds into the video.

UPDATE (Dec. 6): Months after the fact, for some reason, the Globe and Mail looks back on this video and the people in it.

3 thoughts on “SQ cops to it: They were undercover after all”