Well, today is the big day. The New Toronto National Post hit doorsteps across the GTA nation today, with an Amazing New Redesign That Changes Everything. They’ve been advertising it in their paper and others for days now, so I was really excited to see what Canada’s Most Pretentious Newspaper did with itself: 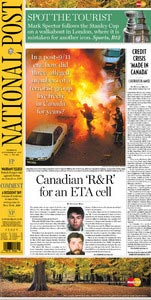 It put its flag down the side. That’s about it.

Of course, why should they fix something that isn’t broken? The National Post “earned 38 international design awards from the Society of Newspaper Design (sic), approximately twice the number of any other English-language Canadian newspaper.” — Translation: We beat the Globe and Star, but lost to La Presse.

The only other noticeable design changes are a slight increase in font size, a very noticeable (I might even say excessive) increase in leading (Torontoist has comparison pictures), and a few other so-hard-to-see-that-I-can’t-see-them changes.

The “redesign” also comes with editorial changes, most of which are vaguely described:

As part of its Big Launch, the Post even managed to get one of Canada’s TV news networks to do a two-minute package glorifying it. Go ahead, guess which one. If you answered “the one they own”, you’re right.

The Post is seeking comments on its blog. Perhaps I can use the comment feature to get them to stop making crappy videos of talking reporter heads awkwardly reading the articles they just wrote that morning.