Apparently the City of Westmount has a policy against public transit bringing people to its lookout.

The Westmount Lookout, at the Westmount peak of Mount Royal, offers spectacular views of the southeast, and is a popular tourist destination.

Unfortunately, because it’s such prestigious real estate, insanely rich people live there and they don’t want no stinking commoner buses roaring up their streets.

This means that the only way to get there is to walk up from a few blocks away, along streets whose sidewalks should be broken up into stairs. 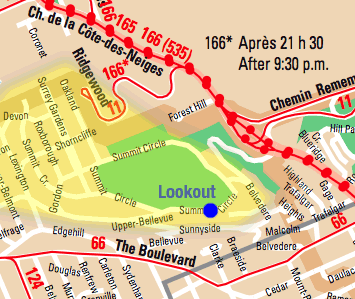 In this image, the yellow area is the higher part of the mountain’s peak, and crossing into it is painful on the feet.

Instead of having actual bus service to this lookout, Westmount is proposing building a pedestrian walkway connecting the top of Ridgewood to a neighbouring street. From there people could walk across the park and to the lookout.

Why wasn’t this done already? Politics. Ridgewood is in Côte-des-Neiges, where the peasants live. Connecting it with a neighbouring street in Westmount would bring violence, drug use, prostitution, theft, sodomy, corporate embezzlement, profanity and bad manners into their uber-rich-and-therefore-problem-free community. So instead, people who want to walk between adjacent streets must climb down a hill, walk along Côte-des-Neiges and then climb another hill.

The pedestrian path is way overdue, and the access is an acceptable compromise (especially since the 11 bus also connects to the other two lookouts). But it’s still making it awkward to get to a public place that we should be encouraging everyone to visit.