Faced with growing opposition from local residents, the city has come up with a solution to the northern Cavendish extension to Henri-Bourassa Blvd.: Fudge it. 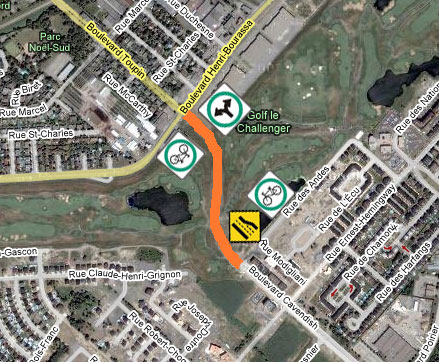 The solution to the problem of traffic barrelling down Toupin Blvd. toward a non-existent bridge to Laval would be to simply disallow it. Traffic heading north on Cavendish would be forced to turn left (toward Highway 13) or right (toward Marcel-Laurin Blvd., Route 117), the nearest roads with bridges to Laval. Traffic heading south would be unrestricted.

Meanwhile, a couple of “environmentally friendly” additions to the plan include reducing the width from three lanes to two in each direction (Toupin is two lanes, Cavendish is three), and adding bicycle paths in both directions (which is great and all, but they don’t go anywhere on either side).

One thought on “The Toupin Blvd. “solution””