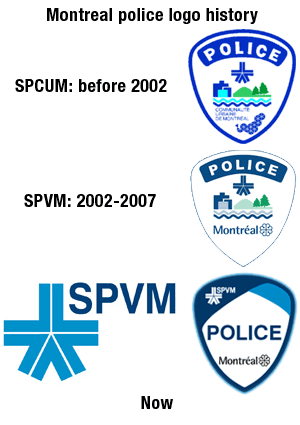 The SPVM has rebranded itself, simplifying its logo to the five-pointed star they’ve had for years tucked into a cartoonish skyline image of the city. The rebranding will also apply to cadets, crossing guards, green onions and other related uniforms, as well as to their vehicles (whose new designs look like they have five exclamation points over the rear wheels). (via mtlweblog)

I’ve always thought their logo could use a bit of a makeover, as busy as it was. But now it seems so simplistic. Maybe I’m just being nostalgic.

Either way, they got to work on that anti-aliasing problem on their website. That’s not the way to introduce a new logo.

UPDATE (Dec. 18): This letter in the Gazette is cute, suggesting the “human form” of the star logo represents someone standing, feet spread out and arms in the air.

3 thoughts on “The SPVM’s new look”