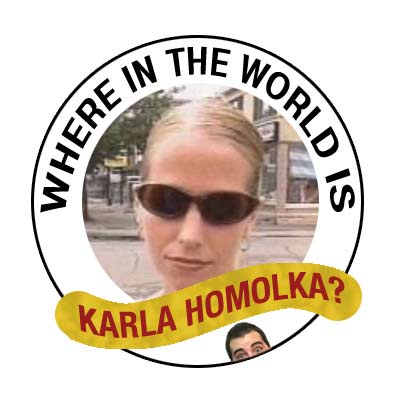 The winner of this round of Where is Karla Homolka Now? goes to TVA, for their EXCLUSIVE report that she’s trying to make a new life for herself in the Antilles.

Did I mention it was an EXCLUSIVE report? An EXCLUSIVE special report, even? Because this report has special EXCLUSIVITY written all over it. EXCLUSIVITATION is what it’s all about. EXCLUSIVELY.

The “reporteurs d’un réseau anglophone” they EXCLUSIVELY speak of (God forbid they should name another media outlet in their EXCLUSIVE report) is Global Quebec’s Domenic Fazioli, who EXCLUSIVELY tracked her down to an East-end apartment in July 2006.

But that doesn’t make TVA’s report any less EXCLUSIVE.

UPDATE: Both CanWest News Service and Canadian Press have put out wire stories that rewrite what TVA reported, even though TVA doesn’t provide a source for their report and nobody can verify any new information about her.