OK, OK, a small hint: You have to look left and right for the answer.

Still nothing? Hint #2: Look at a map of Montreal. You can’t miss it.

No? Another hint: It’s among the most visible of Montreal’s landmarks. (Or perhaps it’s “land”marks?) 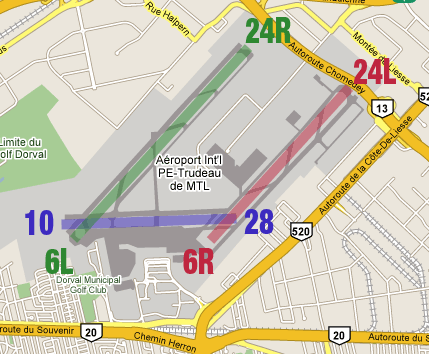 6, 10, 24 and 28 are the numbers that indicate runways at Pierre Elliott Trudeau International Airport.

Runways at airports are numbered based on the direction a plane must be pointed in to take off or land on it, rounded to the nearest 10 degrees. So Runway 28 would be a takeoff or landing at 280 degrees, or almost due west. If the plane was using the same runway in the opposite direction, the runway would be designated Runway 10. Each runway’s two numbers therefore have a difference of 18, or 180 degrees.

Because its two longer runways are parallel, they are designated “left” and “right” depending on the pilot’s point of view (so 6L is 24R and 6R is 24L).

It’s the most visible landmark (airmark?) in the city. How could you have missed it?

15 thoughts on “Montreal Geography Trivia No. 14”