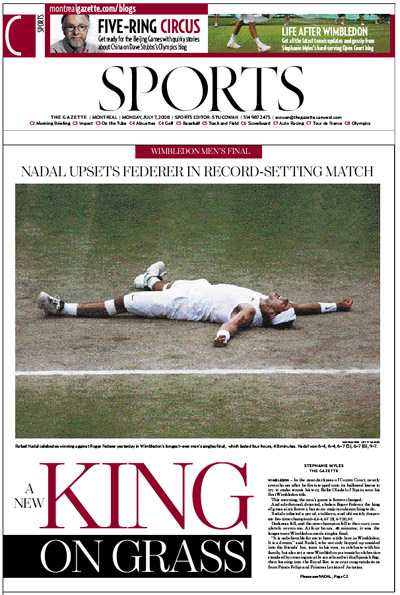 My newspaper employs an entire department of people whose sole function is to make it look nice. Mainly, they focus their efforts on the front page of the paper, meticulously adjusting every headline, deck, skybox, label, photo and other element to make it most appealing to people passing by with a dollar to spare for the guy running the news stand. But they also design important internal pages, and usually have a hand in cover pages for feature sections.

Sports doesn’t usually get that kind of treatment because of how last-minute it is. Aside from the web pointers above the banner, the rest of the page is designed by the editor in charge, and usually consist of a large photo, a main story, a smaller story or column along the side and a feature with a small photo at the bottom.

But on Sunday, with one major story dominating the sports news, I had a problem in the section’s design. The photo I wanted to use, of tennis player Rafael Nadal collapsed on his back in exhaustion and celebration of having just won his first Wimbledon title and unseating five-time champion Roger Federer, was horizontal (mainly because Nadal was horizontal at the time), and the layout was vertical (since the paper is a broadsheet and it was the only story going on the page).

So I turned to the design desk for help, gave the design editor on duty a headline and she went to work. The page shown above is what came back, and is much better than anything I could have come up with on my own. The photo turned out very grainy (due to the fact that there was almost no light at Wimbledon when the game finally ended), but the message got across loud and clear.

And that’s what good design is all about.

One thought on “Good designers think outside the court”