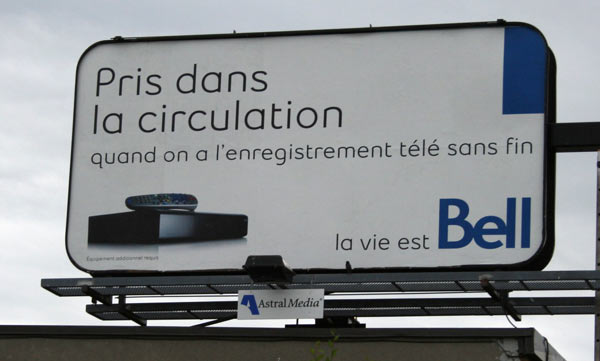 Unless you’ve been living under a rock, you’ve been exposed to ads in print, television, online, outside, in the metro and elsewhere from Bell Canada, which recently changed its logo, dumped its beavers and has launched a massive ad campaign to … introduce their new logo, I guess.

As if to underline the pointlessness of the redesign and the ad campaign, Bell first put up anonymous ads in the metro, with little slivers of the logo. I’m sure some marketing genius thought that would get people’s attention (they certainly bought enough space to get noticed). But really, nobody cared enough to look into it, gossip about it, or put the ad puzzle pieces together to figure out their source. (Well, almost nobody).

When the ad campaign launched, it introduced taglines in both French and English. The French version is “la vie est Bell,” which is a cute but obvious pun. In English, the taglines all end with a bolded, coloured “er”, as in “today just got better“, which makes no sense and has no connection with Bell.

Combined with ads for Telus’s Koodo service, expect to be bombarded with cellphone-related advertising, expecially in the metro.

Bell is also heavily promoting the Samsung Instinct, which it paradoxically promotes as both the “hottest phone of the year” and an “Apple killer” (sorry, “killer“), all with a straight face, in a desperate (and desperately transparent) attempt to show that not having the iPhone doesn’t make Bell executives cry at night.

But the worst part for Bell customers: Every one of the millions and millions of dollars spent on advertising, marketing experts and website designers is a dollar that is not spent improving customer service, lowering rates or expanding the network.

5 thoughts on “Another gigantic waste of money from Bell”