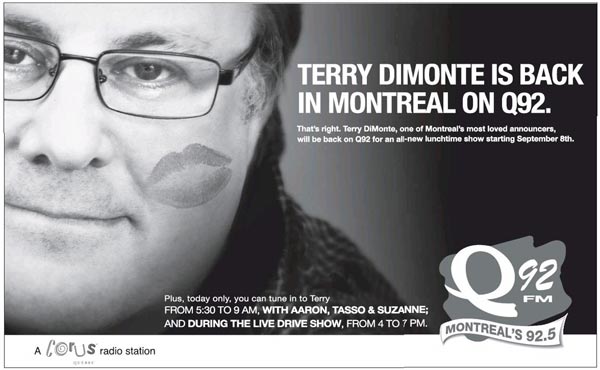 Corus announced today that Terry DiMonte, the former CHOM morning man who left for Q107 in Calgary because CHOM wasn’t prepared to offer him a long-term contract, will return to Montreal’s airwaves starting Sept. 8 with a noon-hour talk/music show on Q92.

What’s missing from Corus’s press release, and the Presse Canadienne rewriting of it, is that DiMonte isn’t physically returning to Montreal. He’s still hosting his morning show in Calgary. Only now, after his morning shift, he’ll stay in studio and do the Montreal show remotely.

This isn’t the first time that a broadcaster has done “local” programming remotely and tried to fool people (Joe Cannon was famous for it and Global Quebec is introducing it), but the fact that Corus left it out of its press release suggests that their goal is to deliberately mislead Montreal listeners.

Fortunately, I’m relatively confident DiMonte has the moral fortitude not to outright lie to his listeners (saying “here in Montreal” or pretending his weather is the same as ours).

The Gazette’s Bill Brownstein has more.