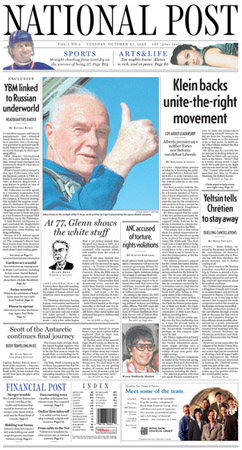 If there’s anything the National Post can cover brilliantly, it’s the National Post. Yesterday, Canada’s conservative voice turned 10 years old, and they’re going all out with a special anniversary section on their website talking about how awesome they are.

Everyone and their cat is producing first-person retrospectives of how new and cool the Post was back in its time. Kirk Lapointe, who worked at the Post during its launch, also chimes in.

Among the other anniversary features:

Love it or hate it, journalists like myself always welcome new voices, and the Post is no exception. It was a bold new paper that took off with a bang. It had big design ideas, it gave a focus to opinion, often promoting such pieces to its front page, and it took some risks.

My biggest problem with the Post has always been its typefaces. Awful, awful fonts. Nothing annoys me about newspaper design more than bad fonts (except, perhaps, long blocks of all-caps text).

As an employee of another Canwest newspaper, whose profits are used in part to keep the money-losing Post afloat, there’s perhaps a bit of resentment. But, like the Ferengi, it’s cute and I’d hate to see it die.

The news isn’t all cheery though. Thanks to budget cuts (the Post is widely known as a financial black hole for Canwest), the paper has been forced to cut its Toronto magazine section. Some content will be incorporated back into the rest of the paper, but that still means cuts. (Insert joke here about the rest of the paper becoming the Toronto section of the National Post.)

One thought on “Happy Birthday, National Post (sorry about your Toronto magazine)”