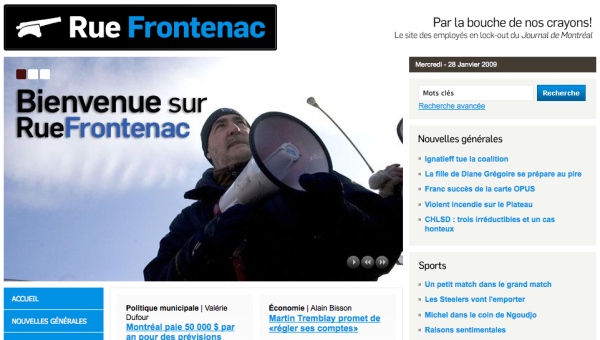 Four and a half days after they were locked out of the Journal de Montréal (too much time for the impatient Patrick Lagacé), 253 unionized workers launched their competing news site, RueFrontenac.com at a press conference at 2pm Wednesday.

In a welcome message, Raynald Leblanc says the union was willing to negotiate about increasing the work week and moving toward multimedia. But they wouldn’t stand for the elimination of entire departments (the Journal wanted to outsource accounting) and the laying off of dozens of staff.

Sports has its own welcome message from Mario Leclerc. And Marc Beaudet is doing cartoons. It’s also continuing the Journal tradition of screaming “exclusive scandal” on stories that don’t sound particularly scandalous.

The site is based on Joomla, and definitely could use a bit of tweaking (Arial as a body typeface? Would it kill you to use serifs somewhere?), especially in the design of individual articles, but it’s a start.

In other Journal news

… and so goes Godwin’s Law.