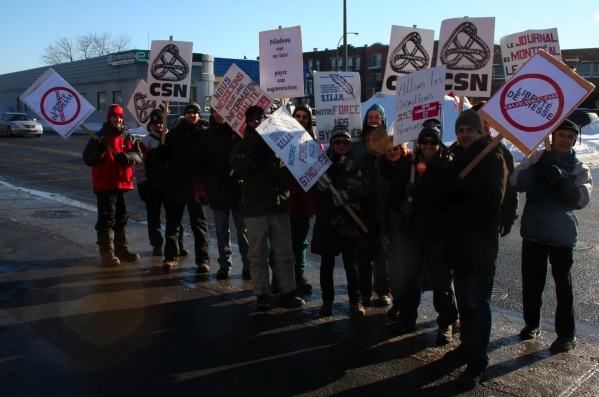 The link of the day comes from this morning’s Le Devoir, in which media reporter Paul Cauchon does an analysis of the Journal situation, the freelance columnist problem and the role of unions in media. It’s a bit opinionative (and, since it’s in Le Devoir, that opinion is left-of-centre), but worth a look.

Patrick Lagacé and Bernard Landry were on Tout le monde en parle last night, and both answered questions about the Journal. Landry recently quit his column (with a lame excuse) and Lagacé had to answer for his boyfriend Richard Martineau, who just won’t quit. Rue Frontenac was watching and has the play-by-play. As does Richard Therrien.

On the other channel (with twice the audience), TVA had the premiere of Star Académie, and Journal workers were picketing outside giving out flyers to audience members. (The Clique du Plateau wonders if Rue Frontenac’s critique of the show would have been as critical if it had appeared in the Journal)

Meanwhile, a journalist at Transcontinental in Quebec City has gotten her job back after she was fired last year, coincidentally (or not) as she was organizing a union for their community weeklies in the area.