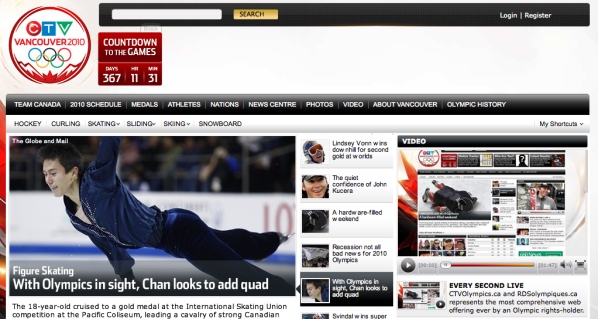 More than a year before the 2010 Vancouver Winter Olympics begin, CTV has launched CTVOlympics.ca and RDSolympiques.ca, where it will have coverage of the games in English and French. (This pretty much seals that RDS, not TQS, will be the primary French-language network.)

This is the first time in over a decade that CTV will be the Canadian Olympic broadcaster, and so much has changed since the early 90s (this thing called the Internet, for example).

For its first Olympic website, it does look pretty impressive. That said, I couldn’t get the video player to work (it’s Microsoft Silverlight-based, though I have that installed), and this is what happened when I tried to play with the past medal count widget:

How dare you try to compare more than four countries? Behold our grammatically-incorrect error message!

Fortunately they have a year to sort that kind of stuff out.