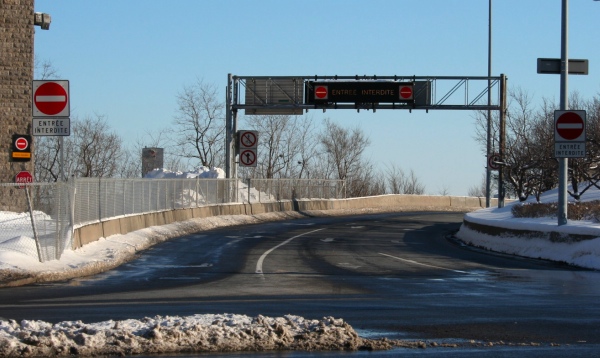 If you’ve ever passed by St. Marc and René Lévesque, you’ve no doubt noticed this road and the signage that surronds it. In this picture, you see four no entry symbols, two straight arrows with red crosses through them, and the words “Entrée interdite” appear three times. The message is crystal clear: Do not drive down this road.

The overprotectiveness is for a good reason: this is a highway exit, and driving down it will have you going thr wrong way down one of Montreal’s busiest expressways.

But, also compared to other highway exits, its design doesn’t make it obvious that this is a dangerous road. You don’t see the highway in the background, and half the time (especially at low-traffic times) you don’t see the traffic in the other direction.

In addition, even those familiar with this area could easily confuse it for the Fort St. entrance a block away: 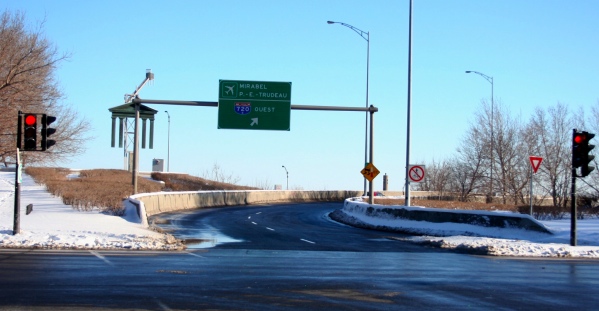 The same turn to the left, the same endless void beyond.

Many drivers, I think, have made the mistake of turning left at St. Marc when they meant to turn at Fort, realizing halfway through that they’d made the wrong turn. Embarrassed, they abort the turn and continue on René Lévesque.

Unfortunately for Diana Clarke, she wasn’t one of those people. The 45-year-old, for reasons that are not entirely clear yet, entered the St. Marc exit, drove along the Ville-Marie Expressway and crashed head-on into an incoming vehicle which was coming off the Decarie Expressway. The crash killed her, while the other driver had minor injuries.

There were mitigating factors. For one, it was just after midnight, making it more difficult to see some of the signs. The other factor is that the largest, electronic sign was partially burned out, and instead of reading “ENTREE INTERDITE” was reading “ENTREE II”. CTV has a picture of what it looked like before it was fixed. (UPDATE: A picture from October also shows the same thing)

The coroner’s office is investigating the death. Though police appear to have ruled out alcohol, it’s too early to say if signage was a factor or if the bad electronic display led to the crash (there were plenty of other signs that made it very clear this road is not to be driven down) 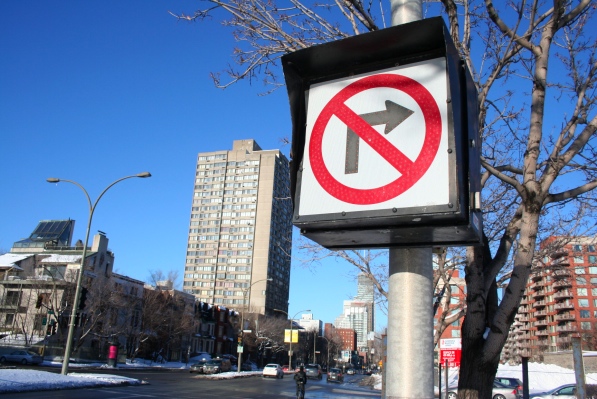