Turns out I took over 100 photos during my few hours at the Nuit Blanche, so I’m splitting up the posts. Part 1 was my time around midnight at the Old Port.

At Place Jacques-Cartier, the High Lights Festival logo was light from below, and that seemed to encourage a lot of people to take their pictures in front of it. 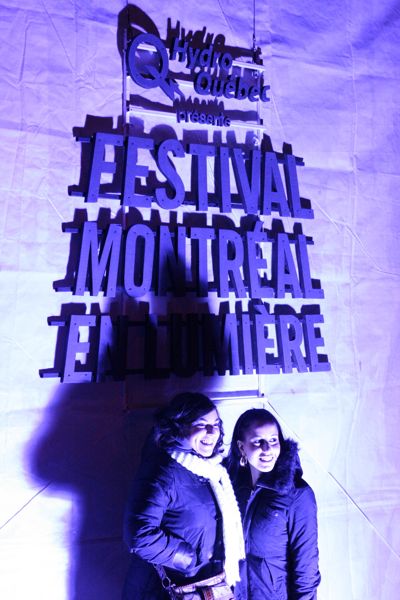 Some just found the giant shadows behind them funny-looking, while others took advantage of the lighting to be more creative. 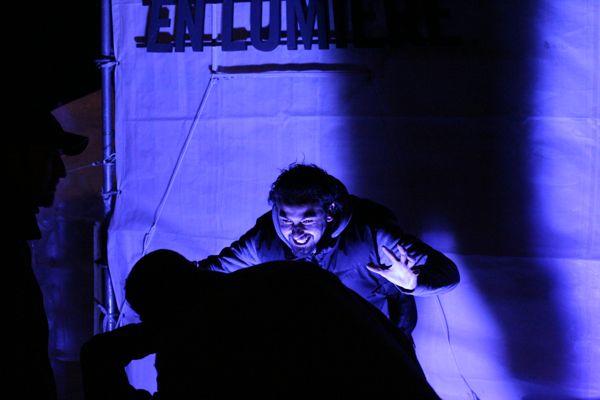 Next to the square was the “Carré de sable”, where children were invited to play. Looked kind of depressing to me: 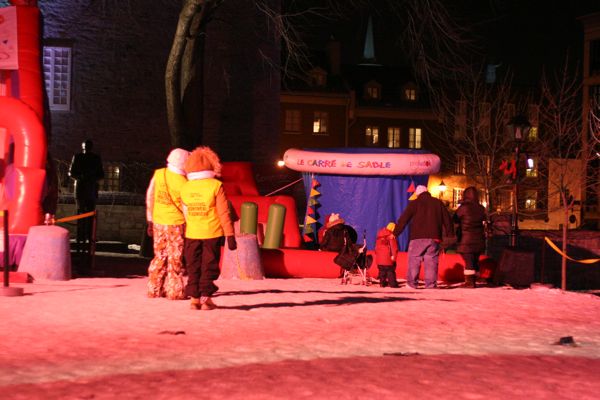 I was surprised by the number of cars, taxis and other vehicles in the area. Surely they would have known about the festival and would have avoided Old Montreal like the plague if they could at all avoid it. 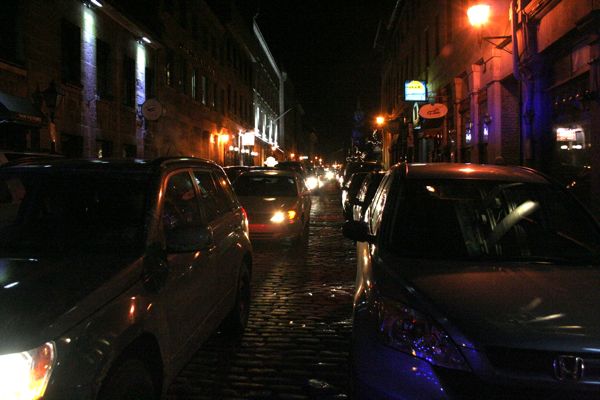 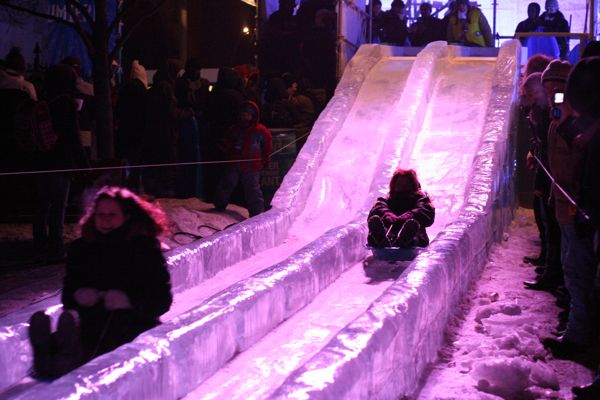 The star attraction of Place Jacques Cartier was the giant milk-sponsored sled run. Taking advantage of the natural slope, it prompted huge lineups (though they didn’t seem as long as the two-hour-plus ones of last year). 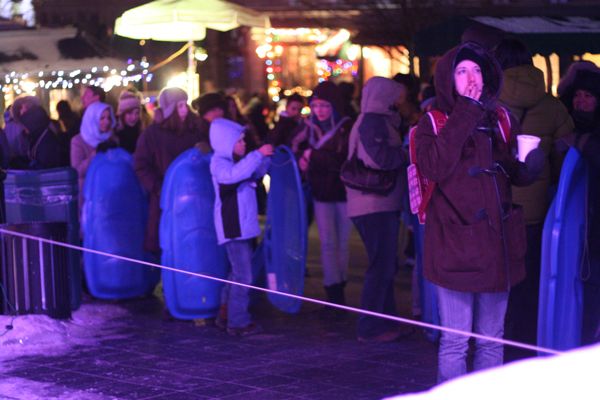 And it was a favourite spot for photographers too: 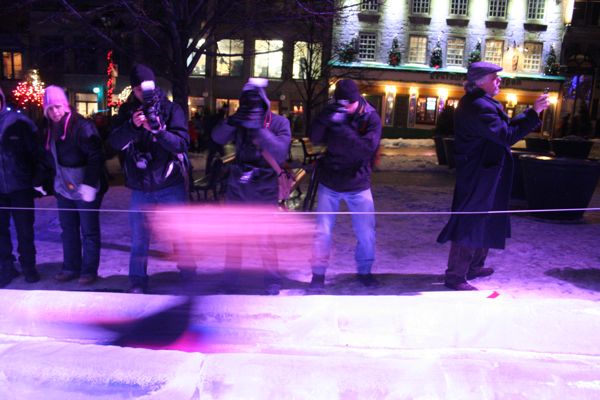 At de la Commune, cops were pretty effective at separating pedestrians and traffic. Fences were setup on either side to force everyone to cross at the same place. 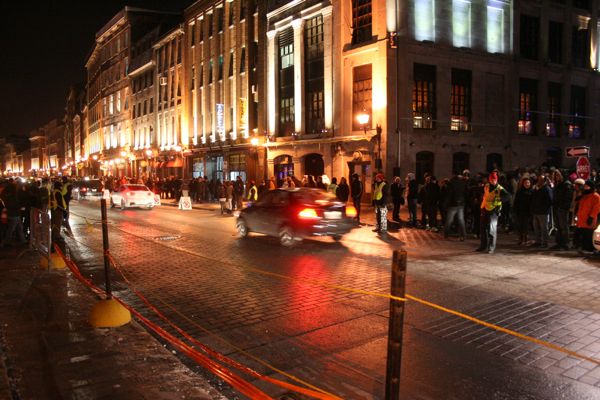 When people were allowed to cross, it wasn’t easy navigating the raging sea. 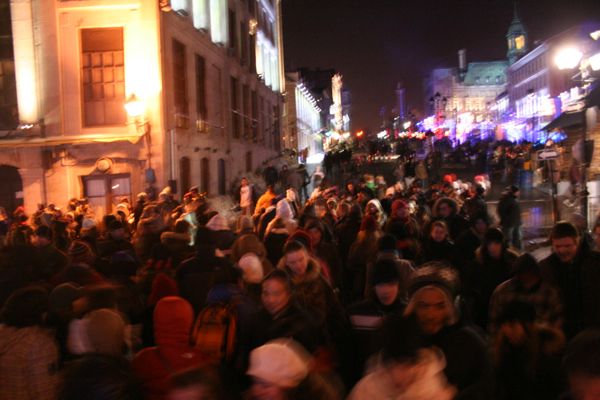 Most of them were no doubt headed to the nearby chalet which had plenty of overpriced sausages and marshmallows on sticks. 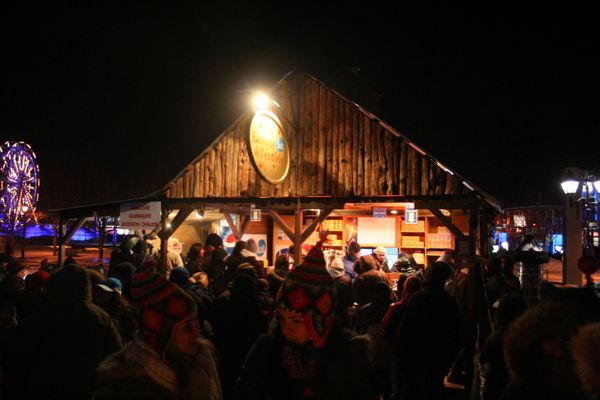 The sticks were so that the cylindrical foods could be placed in fire buckets which seemed to be placed everywhere, emitting all sorts of pollutants in the air. 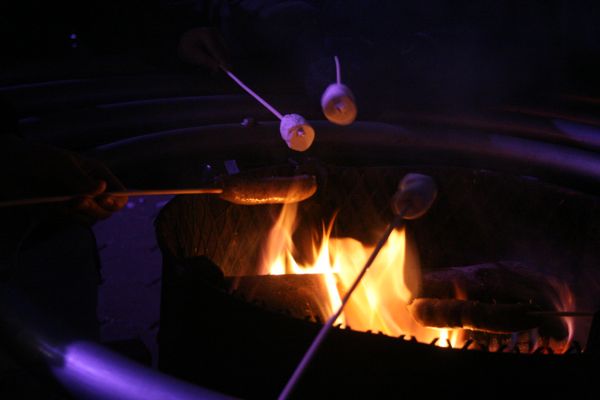 So wood stoves inside homes are bad, but wood-based fires heating the outside in winter is good, at least for one night. 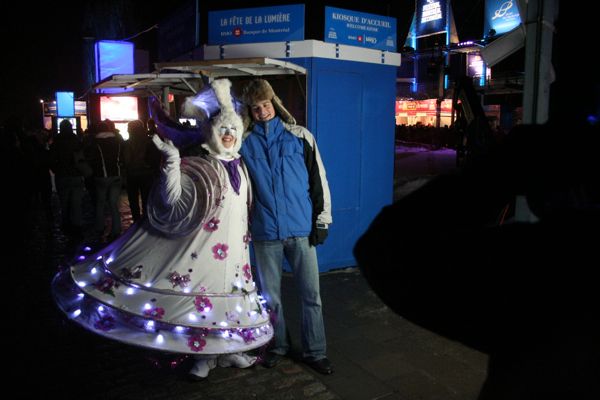 A mascot of some sort. I guess she represents light?

This mascot got a lot of people to take pictures of themselves next to it. Only the guy above had the forethought to make use of the giant bright light nearby. The rest either used flashes or got blurry pictures. 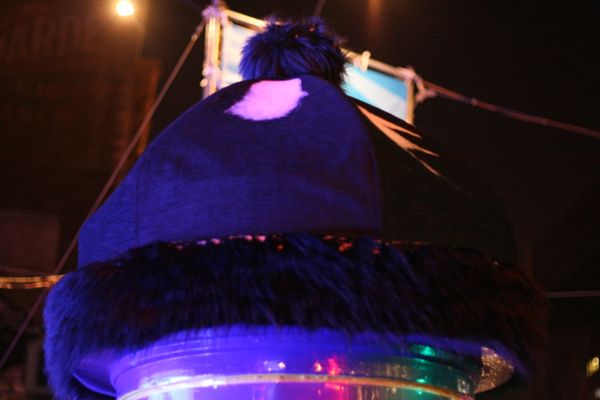 The giant tuques installed on top of information poles were a nice touch. I wonder what they do with them during the rest of the year, though. Or for that matter, where are they made? 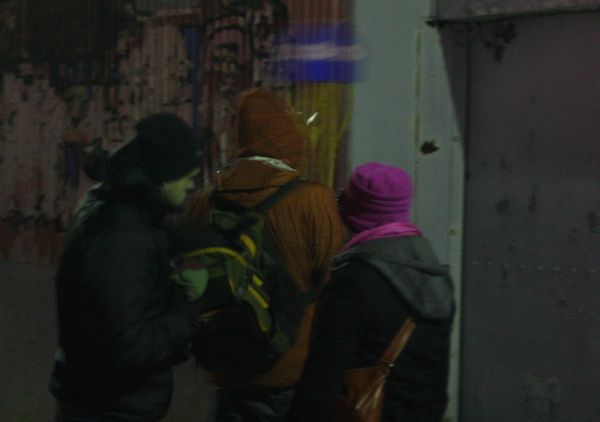 Look ma! I can make this go left and right!

If you happen to notice a fire hydrant that’s been destroyed by a snow plow somewhere near Old Montreal, it’s because this group of outstanding citizens stole one of those blue markers used to identify them. 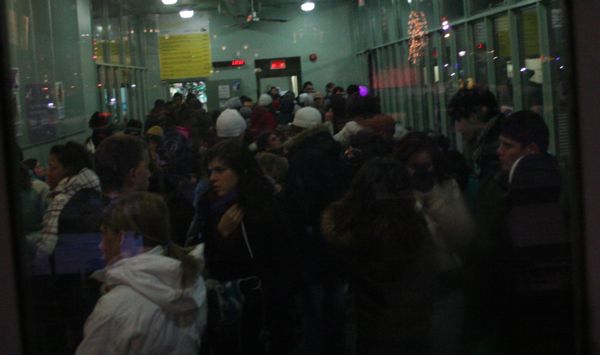 The small building where they rented out skates was standing room only. Everyone wanted to get a piece of the action on the ice: 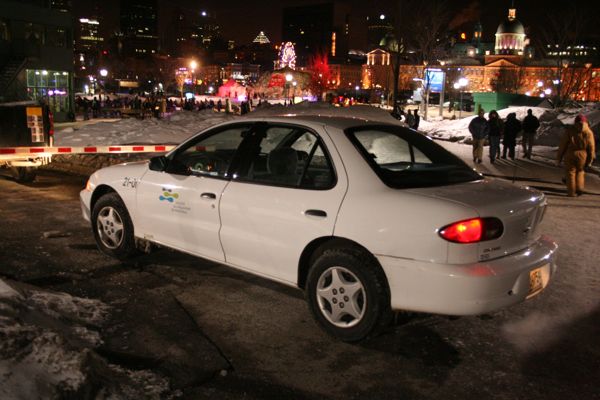 This official Old Port vehicle was left with its engine running and its lights on in front of a gate. I believe there’s a law against that, but I guess it’s no worse than those wood fire pits or giant lights everywhere. 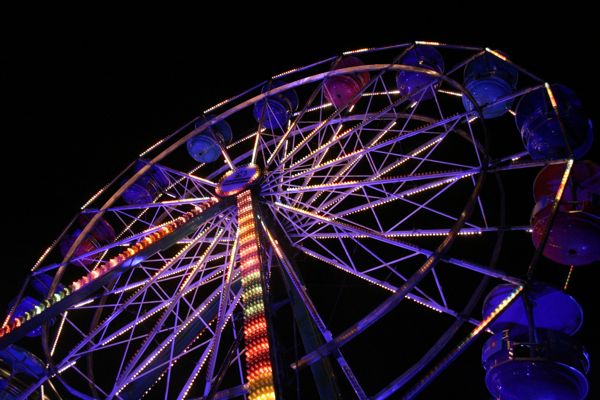 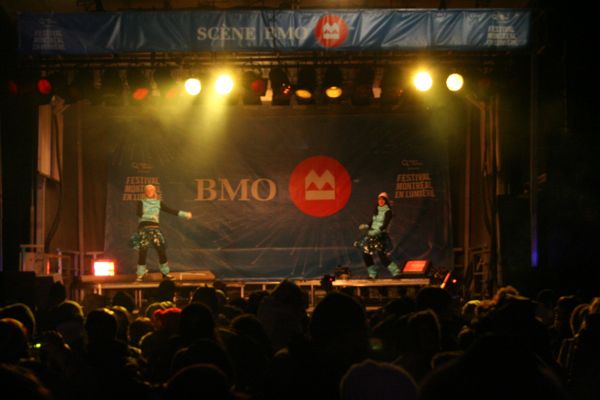 Dancers on stage with everything-pounding music 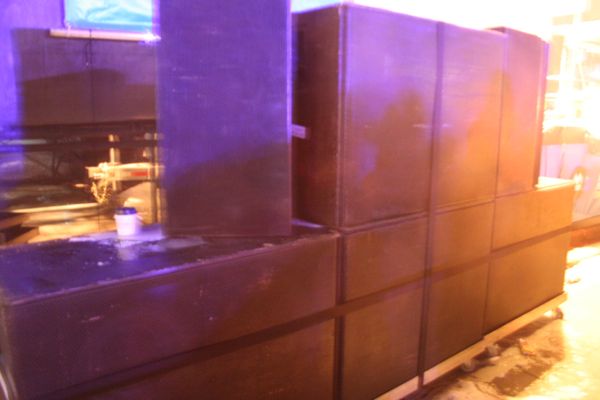 Those giant speakers were more than sufficient 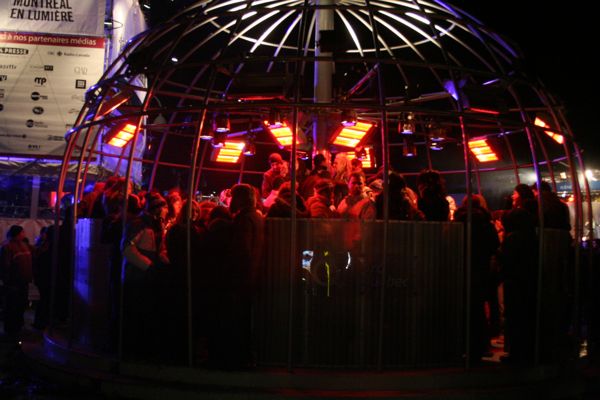 You know, when I first saw heat lamps in action, I thought they were the coolest invention ever. I still think they’re pretty awesome. Unfortunately this was the only place they appeared. Conventional heating and those garbage cans of fire were the norm everywhere else. 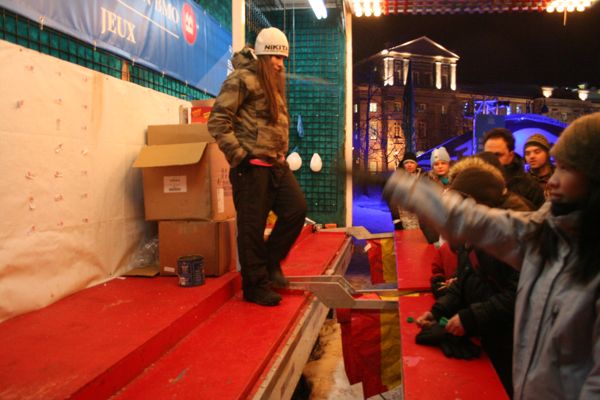 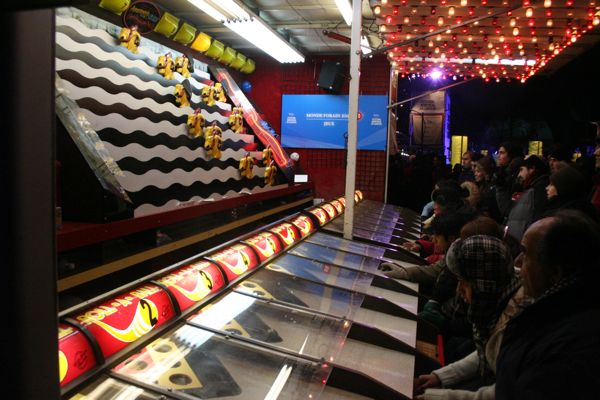 I'm not quite sure what you call this game. Something to do with balls and dogs.

Those games looked fun and all, but nowhere near as fun as this: 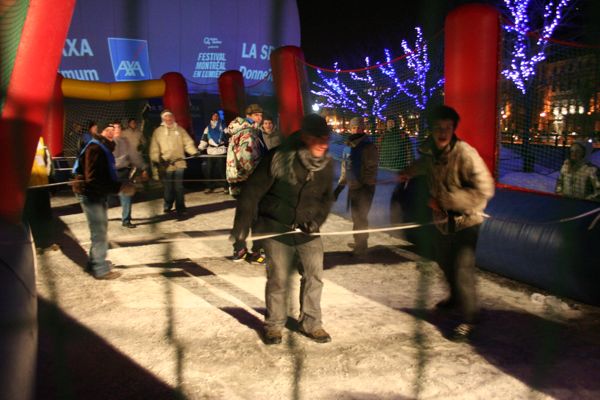 One thought on “Nuit Blanche Part 1: At the Old Port”