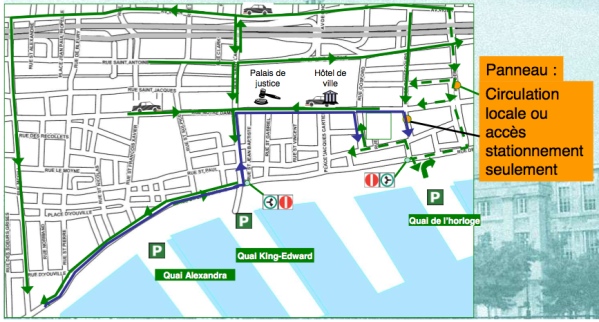 The Ville-Marie borough is holding a public consultation tonight (6 p.m. at the Notre Dame Basillica, 426 Saint-Sulpice) on the STM’s 515 bus, which has the conflicting qualities of being desperately needed and yet horribly underused.

The consultation is actually about traffic measures to be taken in Old Montreal, specifically on de la Commune St. and St. Laurent Blvd., to help the bus through heavy traffic which has been slowing it down.

Currently, de la Commune is one way westbound between Berri and St. Laurent, with only buses allowed eastbound. The 515 takes this reserved lane eastbound, and westbound actually uses Notre Dame, turning left on St. Laurent toward de la Commune (as I pointed out last summer, this particular turn is a big slowdown).

Documents presented by the borough suggest that the ridership numbers are even more dire than one might have guessed. It’s measured in the hundreds, not the thousands. A survey of residents and business owners taken last fall shows that only about a quarter have ever used the bus, and more than half of those use it very infrequently. The main reason given for not using the bus is that it’s easier to walk. Still, more than 60% of respondents approve of the route and think it should stay.

A study commissioned by the borough looked at various traffic options, mainly what kind of traffic should be allowed on de la Commune, and in which direction. It came up with two recommendations: