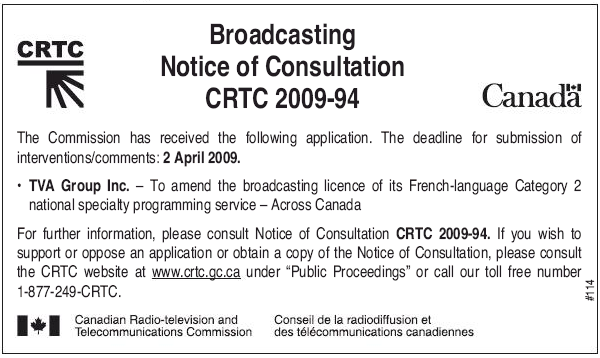 If you’re one of those people who still reads the newspaper, you’ve probably seen ads like this pop up every now and then. Thankfully, even with a recession, various government departments still feel the need to take out ads in the paper as a matter of policy, in the name of transparency.

The advertisement above lets the public know about a public consultation about a request from TVA Group Inc. to amend the broadcasting license of a French-language cable channel.

Except this ad doesn’t say anything useful from a consumer standpoint. It doesn’t say what channel TVA wants to amend the license for, nor does it say what the nature of that amendment is. These would seem to be pretty vital details in a public notice. You don’t have to get into too much detail, but an executive summary couldn’t hurt.

For the record, CRTC-2009-94 is about a request to change the license for Prise 2 to add two programming categories, decrease the amount of time they have to wait before they can air old movies (it’s a “classic” movies channel) and reduce its Canadian content requirement.

That certainly tells me a lot more about what’s going on than what you see in that ad.