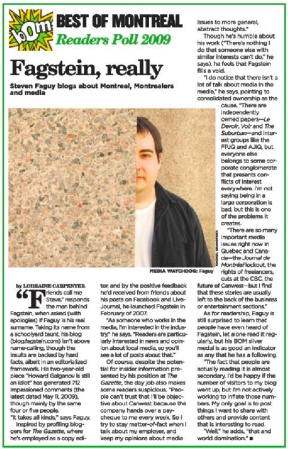 Last year, I asked you specifically not to vote for me in the Mirror’s Best of Montreal poll. You (or at least some of you) wilfully disobeyed me and I placed eighth on the list of best blogs.

This year, I decided to avoid the reverse psychology and say absolutely nothing about the annual readers’ survey when it came out. That failed miserably, because this year I placed No. 2 (behind Midnight Poutine, who are again humble about taking the top spot) and the paper has an interview and picture for all my friends to see (it’s at the bottom, below the giant head of Ted Bird).

The article by Lorraine Carpenter is complimentary (though “Fagstein” wasn’t a schoolyard taunt – they really didn’t need to invent a new name to make fun of me), and Rachel Granofsky’s photo – well let’s just say she took about a hundred shots of me and that was probably the best one (the best photos of me are the ones where part of my face is hidden).

It’s sad that in order to place on this list you essentially have to whore yourself out to your readers (half of the top 10 asked their readers to vote for them in this poll, though some tried to remove the evidence after the fact – I’m looking at you Mike Ward). Two others – Spacing Montreal and Pregnant Goldfish – pimped themselves last year but not this year and subsequently fell in the standings.

But hey, it’s a popularity contest, and that means Céline Dion is on the list for “Most desirable woman”, Jean Charest is on “best politician”, Global on “best TV station”, Metro on “best newspaper”, 3 Amigos tops “best Mexican” and McDonald’s places in multiple food categories.

Unfortunately, that means many high-quality candidates are left off the list. Among them Montreal City Weblog, Coolpolis, Patrick Lagacé, Dominic Arpin, Indyish and Urbania (feel free to nominate your favourite unhonoured blog below).

All that said, I’d still like to thank those who think so highly of this blog and voted for me (which, in the interests of full disclosure, I should admit includes myself – but only once!)

If you’ll excuse me, I have to go pick up a few extra copies for my mom.

27 thoughts on “What do I have to do to get you to stop honouring me?”